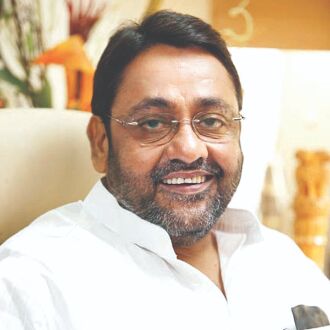 Senior NCP leader Nawab Malik recently doubled down on allegations that a BJP office-bearer and a private investigator were privy to and participated in the Narcotics Control Bureau's raid on a cruise ship off Mumbai coast this week.

Malik, who is also a cabinet minister in the state government, tweeted a video of KP Gosavi (the PI) and Manish Bhanushali (the BJP office-bearer) exiting a white car late on the night of the raid and walking into the central drug agency's Mumbai office.

"Here is the video of Kiran P Gosavi and Manish Bhanushali entering the NCB office the same night the cruise ship was raided," Nawab Malik wrote in his post.

Malik also called out what he saw as a discrepancy in statements by senior NCB officer Sameer Wankhede, and alleged the agency wanted to 'frame two more people'.

"Sameer Wankhede's statement where he said eight to 10 people have been arrested, while eight were arrested. Why was he not sure? Did they have an intention to frame two more?" he tweeted.

Recently, Malik held a press conference to accuse the BJP of 'maligning Maharashtra'. He also alleged the BJP had framed Aryan Khan to attack his father, Bollywood actor Shah Rukh Khan. "For the last month, information was being circulated to crime reporters that the next target is actor Shah Rukh Khan," he said.

Aryan Khan was one of eight people arrested after the NCB raided the cruise ship, but no drugs have been recovered from his possession.

Nawab Malik, whose NCP is part of the Shiv Sena-led Maha Vikas Aghadi government in the state, demanded to know how outsiders were allowed access to the NCB's operation.

"They have locked profiles of Manish Bhanushali and Gosavi. How is Manish Bhanushali present at an NCB raid? BJP is using NCB to malign Maharashtra," he declared. Bhanushali refuted the allegations but also accepted he was the person seen escorting Arbaz Merchant (another of those arrested) into NCB custody, as claimed by Malik.

However, Bhanushali said he holds no official position within the BJP and that he was at the raid for 'updated information', after having provided tips about drugs on the cruise. Nawab Malik also claimed

the man seen in a viral video with Aryan Khan is Kiran Gosavi, a PI, who could be seen leading Shah Rukh Khan's son into the NCB office on October 3.