'My heart goes out to Rhea Chakraborty' 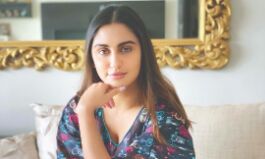 Rhea Chakraborty, who will be seen in the upcoming film 'Chehre', has got support from her co-star Krystle D'Souza.

D'Souza said that Chakraborty is 'still staying strong' and added that 'this whole situation that was created could have ended a family'. Krystle also said that she hoped to 'stand up for her a little more, but it did not happen'.

After the death of Rhea's boyfriend and late actor Sushant Singh Rajput, she was accused of abetment to suicide by his family. Rhea was also arrested on drug-related charges in the case. She spent nearly a month in jail before she was let out on bail.

"My heart goes out to Rhea Chakraborty. Anybody in her place, I do not know how they would go through what she has gone through. She is still staying strong. I do not know if anyone who could have even lasted this whole situation that was created could have ended a family. It is not easy what she and her family were put up with. Hats off to her and to all the women out there that fight for themselves and stand up for themselves," said Krystle.

She added, "I hope I could stand up for her a little more, but it did not happen because you know everything happened so suddenly. More than anything, this pandemic hit all of us personally. As we all were going through so much in our own lives, standing up for another person was becoming difficult at that point. I do not know how that girl did it, but hats off to her."

Directed by Rumi Jafry, 'Chehre' features Amitabh Bachchan, Emraan Hashmi, Siddhanth Kapoor, Krystle D'Souza, Rhea Chakraborty, Annu Kapoor and Raghubir Yadav. The film was scheduled to release in April but was delayed due to the COVID-19 pandemic. It is set to release in theatres on August 27.

With 'Chehre', Rhea will make her comeback after three years. She was last seen in 'Jalebi' in 2018.