'My ethnicity has been a setback in getting me work' 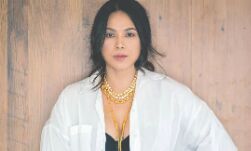 Mumbai: Hindi film industry's 'narrow vision' for artists from the North East has resulted in fewer opportunities for actors like her, says 'Axone' star Lin Laishram, who believes it is about time Bollywood stopped stereotyping people from the region.

After appearing in 'Mary Kom', 'Umrika' and Vishal Bhardwaj's 'Rangoon', the Manipur-born actor rose to fame with 2020's comedy-drama 'Axone'.

"My ethnicity has been my biggest struggle in the industry as it is a setback in getting me to work. I have so many friends who are established now with whom I studied acting and did theatre. They are doing way more work than I am doing right now. If I have two auditions in a month, they have 15-20. It is easier for them to get roles," she revealed.

Lin added, "We have IAS officers, sports personalities and writers. But when you come to Bollywood, their idea and vision of our people gets narrow and reflects in casting. It is annoying."

"Bollywood, for us, was larger-than-life. It was impossible to even dream of working there and that was the level of disconnect we felt. We did not speak Hindi so fluently and did not look the same," she mentioned.

Laishram stated, "The only person we kind of connected with was Danny. He looked like us but he was so good with his Hindi, he sounded like any other actor of his time. We felt he was more like them than us because he did not have an accent."

"Even then, people had problems casting me in roles. I knew from the beginning that this would not be easy. Somebody needed to take that chance and put confidence in me that I could pull it off. Vishal Bhardwaj took that chance and cast me for 'Rangoon'. The space he gave me was that of respect. I needed that," she said.

Refusing work has not been easy for Laishram as with each cliche role she turns down, she loses her time and money.

"You start questioning your own choices, even if you are doing the right thing. It confuses you and makes you self-doubt. A girl from Delhi would have a Kareena Kapoor or Anushka Sharma to think about. That 'this is how probably they made it, so I will do the same'. But I did not see any North Eastern actor (on-screen) who would look like us. I had no other footsteps to follow. To learn that if you do smaller roles, it will lead to something big. I did not have that luxury," she shared.

The actor hopes the least Bollywood can do is become democratic so that everyone gets an equal chance at success without their identities deciding their privilege.

"I just want a fair chance. I should get what I deserve," she said.