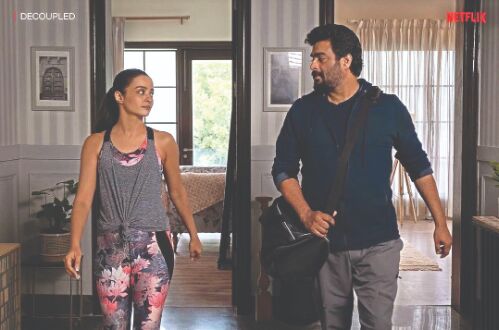 On November 10, OTT streamer 'Netflix' released the first trailer of its upcoming dramedy 'Decoupled', starring R Madhavan and Surveen Chawla. The promo offers a glimpse of the separation that a couple, Arya and Shruti (played by Madhavan and Chawla), is undergoing.

As a story that focuses on plot building, 'Decoupled' seeks to shine the spotlight on the character development of its protagonists. From the beginning to the end of the video, viewers can see Arya and Shruti exchange repartees, clap backs and genuinely honest moments on-screen.

Speaking about 'Decoupled', creator Manu Joseph Mehta said, " 'Decoupled' is about a guy who can see in any situation what others are trained to ignore. Naturally, it gets him into trouble wherever he goes and this sort of objectivity is not healthy for a man in a marriage. One of our goals was to keep it all real. The thing about comedy is that if it is not real it is not funny and what is difficult about comedy is that every component in a scene has to fire for it to work."

"It was amazing to watch Madhavan throw away his good-boy image for the lead role and reach deep into his delinquent side. Surveen Chawla, playing his long-suffering wife, had a particularly challenging role because it is extremely hard to play a normal sane person. I'm grateful to the director, Hardik Mehta, who taught me that men with great hairstyles can still be very grounded and hardworking," he added.

The Hardik Mehta directorial will start streaming from December 17 on 'Netflix'.