Luring students into the magical world of books 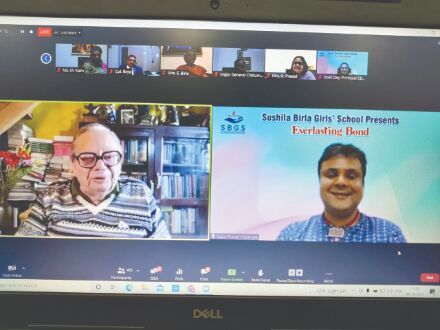 As part of the 'Sushila Birla Memorial Day' celebration, Sushila Birla Girls' School organised a session with eminent author Ruskin Bond on October 4, 2021. The author was in conversation with

Sujoy Prasad Chatterjee in an event, which marked the culmination of a fortnight-long literary fest.

A creative writing workshop was organised for the students by 'ThinkArts' along with a reading workshop by 'Scholastic'. Also, students of the 'Primary Section' were regaled with storytelling sessions by storytellers Swati Kheria and Sonam Mantri.

A book titled 'Utopia in Dystopia', written and illustrated by the students from Classes IV to XII was launched on October 4 and the e-version of the same has been uploaded on the school website for the perusal of all.

At a time when students are gradually moving away from reading for pleasure, this event was an attempt made by the school to lure them back into the magical world of books. Reading sessions were organised for students, in which they celebrated the works of Agatha Christie, HG Wells and Roald Dahl, whose birth anniversary falls in September.

Apart from the workshops, important conversations also took place between the authors and the schoolteachers. Diverse topics were covered including authors' experience in creative writing, exploring avenues of writing in English and more.

The grand finale of the literary fest began with the school song. Speeches were given by S Birla, President, Sushila Birla Girls' School Managing Committee with other teachers.

Towards the end, Ruskin Bond discussed the similarities between Apu of 'Panther Panchali' and Rusty - Bond's iconic hero. He also elaborated on Rusty being his alter ego, the cinematisation of his books and the role of topography

in shaping his writings. The author then answered a couple of questions posed by the students and the session ended with a vote of thanks by one of the teachers.