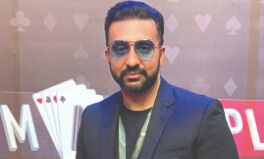 MUMBAI: Businessman Raj Kundra on Friday challenged before the Bombay High Court his arrest in a case of alleged production and distribution of pornographic films through apps, saying these videos might be described as "lascivious" but do not show "explicit sexual acts".

Kundra (45), the husband of actor Shilpa Shetty, was arrested on July 19 by Mumbai Police. A magistrate's court remanded him in police custody till July 27.

The petition sought quashing of the lower court's order.

Mentioning the businessman's arrest as 'illegal', the plea contended, "The material which the police claim to be pornographic did not "depict direct explicit sexual acts and sexual intercourse but shows material in the form of short movies which are lascivious or appeal to the prurient interest of persons at best."

Hence section 67A of the Information Technology Act (publishing sexually explicit content) cannot be invoked, and at the most it would attract section 67 (publishing lascivious content), it said.

Earlier, his lawyer had said, that the arrest did not follow the due procedure. "Without following the due process of law under the provisions of Section 41A of the Code of Criminal Procedure, 1973, as mandated by the Supreme Court from time to time, police arrested Kundra by calling him under the grab of recording statement," he had submitted.

"In the 'WhatsApp' chats, we have found that Raj Kundra was talking about a deal about selling 121 videos for 1.2 million dollars. This deal seems to be on the international level," shared the Mumbai Police.

The police also suspect the money earned from pornography was used in online betting. "That is why his Yes Bank account and United Bank of Africa account need to be investigated," they told the court.

Earlier on July 23, Kundra was taken to his Juhu home in Mumbai for the first time since his arrest last Tuesday. He was escorted by Mumbai Police team that searched the house he shares with wife and actor Shilpa Shetty.

A sandbox with 48 TV data full of adult content had been found since the arrest, the police said in court, arguing for Raj Kundra's custody to be extended. Some 51 obscene clips were also found; 35 of them were on "HotShots". The app was removed from google store and IOS, so the accused "activated Plan B" and launched another app, Bollyfame.

As the case proceeds further with the ongoing investigation, some celebrities shared their stories and opinions related to Raj Kundra.

Marathi actor Umesh Kamat fell prey for being wrongly associated with the case after certain media outlets used his photos to present their report. Speaking about it, the actor said, "I went through a very outrageous experience of irresponsible journalism. In the search of one Umesh Kamat alleged to be involved in the recent Raj Kundra case, my name was picked up recklessly out of nowhere and associated with the case without any verification of facts. Maybe the media does not realise, but this single irresponsible incident has led to immense mental agony and irresponsible damage to my image."

He added, "Within no time, I and my family were flooded with calls and questions coming from all over the country, just because someone was in a haste to get a scoop and was not professional enough to verify the facts. Huge damage has been done! I shall pursue the necessary legal remedies against the respective channels."

Model Sagarika Shona Suman, who revealed that a nude audition was demanded from her, claimed that she started getting abusive and vulgar calls.

"I'm disturbed and depressed because I'm getting death and rape threat calls from different online platforms. People are calling me from different numbers and asking me what wrong has Raj Kundra done," she said.