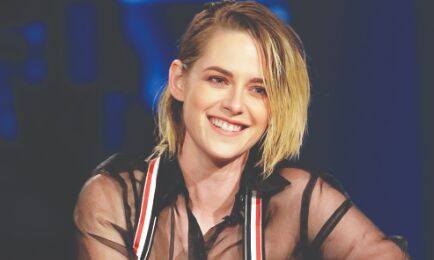 Hollywood actor Kristen Stewart opened up on playing the iconic Princess Diana in the upcoming movie 'Spencer'. The 31-year-old actor said that she felt the Princess of Wales' presence while filming for her biopic. Referring to her 'spooky' and 'spiritual' feelings while being on the sets, Stewart revealed getting a 'sign-off' from the late Princess.

In the movie, Stewart plays the Princess during her winter break in 1991 when the royal family was staying at Sandringham House and wanted to separate from Prince Charles.

In an interview with 'Los Angeles Times', via 'ET Canada', Kristen mentioned that she had 'spooky' and 'spiritual' feelings while making the movie. In the movie, Princess Diana reportedly also communes with the ghost of Anne Boleyn from time to time.

"I felt like there were moments where I kind of got the sign-off. It is scary to tell a story about someone who is not alive anymore and who already felt so invaded," Stewart said.

She added that the cast and crew of their movie never had the intention to invade Diana's privacy.

"We were kind of adding to the multiplicity of a beautiful thing," she said.

The Charlie's Angels star said that the late Princess felt alive to her while she was portraying the role.

dead. Suddenly, I would just have an image of what happened," Stewart revealed.

She also added that she would be 'amazed' by the 'renewed emotions' whenever she thought of the Princess.

In a rather shocking confession from Kristen, she revealed that she would 'fully break down' two to three times a week while thinking of the fact that Princess Diana had passed away. Stating that she could not come to terms with the news still, Stewart revealed that she would try to 'keep her alive every single day' through her acting in the movie.