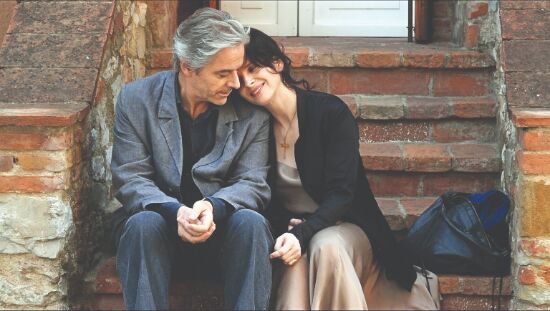 The master of individualistic cinema, Abbas Kiarostami once expressed in an interview that getting close to truth was only possible through lying. His film, Certified Copy reverberates with this intrinsic philosophy. The film is an admirable critique of the values of a counterfeit over its original. Following the same trail, he however chooses to harp on marital love and its authenticity with aging relationship. Shot in Italy, Certified Copy is so supremely a European drama that the two key performers speak with estimable ease in French, Italian and English.

A British author launches his new book 'Copie Conforme', (Italian of Certified Copy) in Italy. Author James Miller so elucidates his idea in front of a small gathering, 'Mona Lisa is the reproduction of La Gioconda… Would we treasure the copy?' Sitting in the audience, a nameless French gallery owner, credited only as Elle (She in French) in the film, feels instantly connected with the author and his absorbing deliberation. The first half of the film seemingly picks up a slow-burn romantic path from here as the author and his mystery muse travel to their destination in the lap of a lush Tuscan landscape. Kiarostami's long, single take of characters in the film, watchful manipulation of reflection on the windscreen or mirror, continuous focus of camera on the subject of discussion and aural presence of human being are the hallmarks of his notion about cinematic gaze.

An engaging conversation about the dichotomy of original and counterfeit draws the on-screen couple even more closure. Then, after being misidentified as a married couple in a coffee shop, 'She' suddenly unfurls a whole index of attributable deficiencies about her 'husband'. With the audience now kept guessing whether it is an illustration of true love or mere playacting to be in love, the director transcends his previous works in this film. He exudes his sense of metaphor of platonic love with a Persian poetry, 'A garden of leaflessness…who dares say that it is not beautiful?'

The author, William Shimell, an operatic baritone debuting in this film with one of the most cerebral actresses of the world, Juliette Binoche is another contrast that Kiarostami loves to experiment. Elegant Binoche, consciously neurotic, maintaining all her character arc wins the best actress award at Cannes festival 2010 for this film, whereas stiffly composed and boringly well-mannered Shimell gives his co-actor the much-needed space.

Though for many, Certified Copy seems maddeningly oscillating in a time-worn premises which veils the truth, but using a grand narrative of fiction-poetry who can portray marital love and its crux in a film, better than Kiarostami?