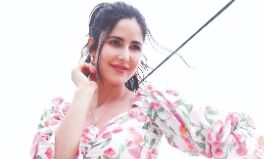 Salman Khan and Katrina Kaif are reprising their roles as Tiger and Zoya respectively in the much-awaited third instalment of the 'Tiger' franchise, which will be directed by Maneesh Sharma and produced by production banner 'Yash Raj Films' (YRF).

According to a news report, Katrina will be performing high octane never-seen-before stunts in the 45-day shooting schedule in Russia.

"Katrina left for Russia recently for a 45 days international shoot. She will be performing high-octane never-before-seen stunt sequences in this schedule and has been extensively training for the same over the past couple of months," revealed a source.

The film will have extensive car chase sequences in Russia before heading to the next location.

"The chase scene sees Salman Khan flaunting the long-haired look as he, along with Katrina, chase down one of the baddies around the streets of the city, including opposite St Isaac's Cathedral. It begins with the actors inside a

tram, then a horse-drawn carriage, after which they hop onto a

car and finally reach the underground metro. Since each metro station is uniquely decorated with details about Russia's past, the makers wanted at least one scene to be set in a station," said the source.