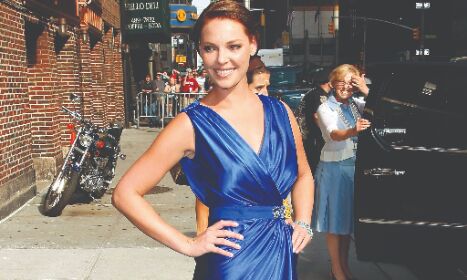 Katherine Heigl has pledged to support behind-the-scenes workers in the entertainment industry. She credits the crew she has worked with over the years for making her who she is today.

The Hollywood star has spoken out about the reported working conditions on 'Grey's Anatomy' in 2009, when she said to have worked a 17-hour day on set and despite the backlash she subsequently encountered, the actor does not intend to back down amid her fight for justice.

Heigl in a post on 'Instagram' wrote: "I have celebrated life's big and small milestones with my crews. First real love. Marriage. Babies. Turning 21. Turning 30. Turning 40."

"The crews I have worked with all these years have been just as instrumental in making me who I am as anything else lasting and important in my life. They have been family in that way and I have always and will always continue to support and stand by them," the post read further.

Heigl subsequently addressed the backlash she encountered more than a decade ago, after she decided to speak up on the issue, reported 'femalefirst.co.uk'.

"Some of you may remember over ten years ago I was very vocal about the absurdity of the working hours' crews and actors were being forced into by production. Even Diane Sawyer interviewed me and not so kindly informed

me 'no one feels sorry for you'. I very publicly and for many years after I got kicked for speaking up," she revealed.

She further said, "I let that public spanking shut me up and shut me down. I took a very big step back from the hustle of my career and retreated into the woods of Utah. I spent a fair amount of time struggling with self-confidence and self-worth. I let myself be convinced that I was wrong. That speaking out made me seem ungrateful or precious or as if I were 'biting the hand that fed me'."

She is determined to fight for justice and to speak her mind on the issue.

She wrote, "I speak up today and say with zero hesitation or regret 14, 16, 17, 18-hour workdays are not safe. They are not healthy. They cannot and should no longer be tolerated."