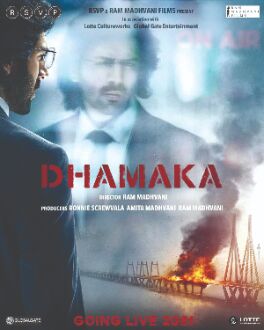 The trailer of 'Dhamaka' has hit the Internet and it features Bollywood star Kartik Aaryan as a news anchor named Arjun. The film, set to release on 'Netflix', revolves around a news anchor chasing TRPs while the city of Mumbai is under attack by a terrorist.

The trailer opens with Kartik negotiating with the channel head, played by Amruta Subhash, to return as a news anchor after he gets a tip about bomb blasts at the Bandra-Worli Sea Link, in Mumbai, on his radio show. Assuring high TRPs, Kartik addresses the nation and even connects with the terrorist on his show.

But soon his life takes a turn when the terrorist tells him to call a minister and tell him to apologise otherwise, he would blow up the remaining Sea Link and kill everyone there, including his wife, played by Mrunal Thakur.

'Dhamaka' is directed by Ram Madhvani. According to a leading daily, Kartik told the press at the launch of the trailer that he shot the film

in nine days. He added that it was one of the 'most challenging roles' he's played.

"It became a cakewalk because of Ram sir. He is a maverick. He shoots in a very different style. Everyone who knows him can vouch he is different as a director. The film is based in a room and everything is real. He has a unique filmmaking style where he never even says action and allows actors to start. 'I am at your service' is his line and he follows it to the T. It was challenging when I heard the script, but he made it easy for me," he said.

'Dhamaka' is set to premiere on 'Netflix' on November 19.