Justin and Hailey Bieber get real about their three-year marriage 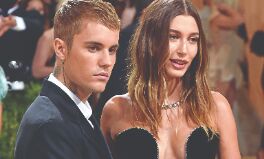 Justin and Hailey Bieber recently opened up about their marriage, shared struggles and how the couple overcame them in a recent chat on the podcast 'In Good Faith' with Chelsea and Judah Smith.

The pop singer, 27 and the 24-year-old model got real about their three-year marriage and the struggles they have overcome during the time.

"We always had so many conversations about, 'What were our goals? Where did we want to end up at a certain age?' We always talked about wanting to be married and be young and have a young family and have kids young," Baldwin said.

After tying the knot in 2018, both Hailey and Justin have been open about their desire to grow their family. In fact, in Justin Bieber's recently released documentary 'Justin Bieber: Our World', the singer said the pair would ideally start trying for a baby at the end of 2021.

Even though the couple is as strong as they come, Justin admitted that it is not always the case. The singer also looked back at the mental health struggles he was struggling with around the time of their wedding.

On the podcast, he said: "I had experienced so many things in my life. So many milestones and travelled the world and seen everywhere in the world. And I just got to a place where I was lonely and I just did not want to do it all alone. I realised there was some serious healing I needed to go through to get to a place where I could be in a healthy, serious relationship because I had a lot of trauma and scars. So, I just committed to working on those things and getting healthy."

Though the couple split temporarily in 2016, they found their way back to each other in 2018 and were engaged that following July.

"Luckily, Hailey accepted me as I was. Even when we got married, there was still a lot of damage and hurt that I still needed to work through," Bieber said.