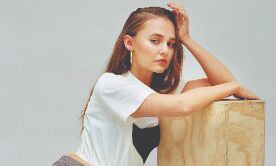 Madison Iseman says the rebooted 'Jumanji' movies were a turning point in her career and she is hopeful that the makers will plan to come up with a third movie in the franchise someday.

Iseman featured as the social media savvy Bethany Walker in 2017's 'Jumanji: Welcome to the Next Level' and its 2019 sequel 'Jumanji: The Next Level'.

The original movie was a reboot of Robin Williams' classic 1995 movie 'Jumanji'.

The actor said her career took a whole new direction after she starred in the franchise alongside the likes of Dwayne Johnson, Kevin Hart, Jack Black and Karen Gillan.

"That movie just completely changed my life and I'm so grateful for everyone behind it. And there is still hope that maybe we will do another one," she said.

She added, "I do not know, especially with the pandemic and the whole theatre situation right now, but I love all those people so much and I kind of owe them everything."

Before the hit franchise, she appeared on the series 'Modern Family' and 'Henry Danger' and later starred in horror films like 'Goosebumps 2: Haunted Halloween' and 'Annabelle Comes Home'.

Iseman currently features in the teen horror series 'I Know What You Did Last Summer' and she said the show continues the trend of her being part of projects that are fresh takes on stories told earlier.

" 'Jumanji' was the first scary franchise that we decided to remake. And the same thing was with the show. It was so great and reinventing it and making something different. So maybe this is becoming a trend for my career," said Iseman.

'I Know What You Did Last Summer' is a contemporary adaptation of the 1973 novel by Lois Duncan and the 1997 American slasher film of the same name, about four young teens whose high school graduation party takes a deadly turn when they kill someone in a car accident.

In the show, Iseman plays the roles of twin sisters - Allison and Lennon. To play the parts, she said it was essential to have a better understanding of the two characters.

The show is produced by 'Amazon Studios' and 'Sony Pictures Television'.