Joaquin, Rooney to be a part of 'Polaris' 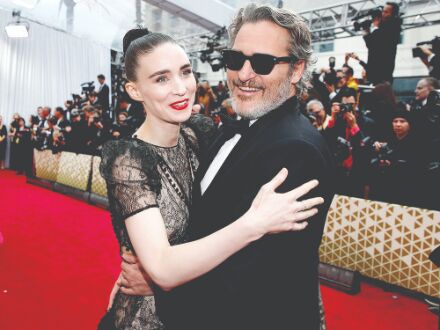 Joaquin Phoenix and Rooney Mara are all set to work together again, this time in director Lynne Ramsay's 'Polaris'. As per 'Collider', the filmmaker confirmed the news during an interview with 'El Espanol' while attending the 'Valencia International Film Festival'.

Previously, Ramsay worked with Phoenix on 2017's psychological thriller 'You Were Never Really Here'. In the interview, the director was all praises for Joaquin's acting talent and his unique process.

It is yet unclear as to what role Phoenix and Mara will play in the film. Joaquin and Rooney first starred together on screen in the 2013 film 'Her'. Later, the duo also starred together in films like 'Mary Magdalene' and 'Don't Worry, He Won't Get Far on Foot' in 2018. The couple announced their son's name last year who is named after Phoenix's late brother, River Phoenix.

On the professional front, Ramsay's movie will mark the first time that the duo will be working together since their engagement.

As for working with Phoenix for the second time for 'Polaris', Ramsay said, "He is crazy, but he is the best actor I have ever met. Everything he does on the set has a reason. It is much more difficult when you come up with an original idea like this, but it is impossible not to get excited when you are preparing a movie with Joaquin."

Apart from this film together, both Rooney and Phoenix have several major individual projects lined up. Mara was confirmed to be a part of Guillermo del Toro's 'Nightmare Alley' and also for Sarah Polley's literary adaptation 'Women Talking'.

Joaquin has been busy shooting for Ari Aster's 'Disappointment Blvd' and also has a film with Ridley Scott lined up.