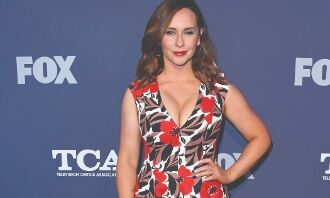 Recently she wrote on her 'Instagram Story' that she is taking a break from social media to re-calibrate herself after the birth of her third child.

"Today is my first day back in the sauna after being pregnant and having my baby. Two days ago, it was my first long bath since labour. Some things you cannot do till the doctor says so and others you just stop taking time for," wrote Hewitt.

She added, "But self-care, moments to breathe and to feel yourself again even in small ways are so important."

"I am also starting at least a week, maybe two away from social media tomorrow. I need to reset. I need to take my scrolling time and make an active time. Workouts, breathing, manifesting, time with my kids and husband. All of it," she continued.

The mother of three said that social media 'makes me feel bad sometimes', causing her to feel 'like I'm not enough. Doing enough. Getting my body back fast enough. Giving enough. All of it.' She also added that because she is 'giving up social media', Atticus and Autumn told her they want to 'give up 'YouTube' shows!'

She joked, "So one small miracle already."

Meanwhile, 'The Ghost Whisperer' alum recently, as per 'People', said that she loves 'the experience' of being pregnant, though her third baby will likely be her last.

"I'm pretty sure. I do not think I could do another one. I think five is a great number," she said.