Jennifer and Nicole humanised me: Adele 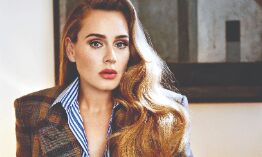 Adele is one of the world's most famous people, yet even megastars take their children to school and make friends with other mums in the area. The 'Easy on Me' singer said in a new 'Rolling Stone' article that she and ex-husband Simon Konecki, who lives across the street from her in Beverly Hills, 'do school drop-off' with their son Angelo, 9 and she has made some local girl mates' people may recognise: Nicole Richie, mother of two and mom-to-be Jennifer Lawrence.

However, making famous pals, according to Adele, 33, had a significant influence on her.

"They humanised me because I had avoided talking to anyone that was ever famous in any capacity, because I was like, 'Well, I'm not famous'. I'm very British like that," she said as per 'Rolling Stone'.

She added, "We never spoke about work, which was amazing, because most of the time when I catch up with someone, they want to know all about my work and I'm like, 'I do not want to talk about that. Can we talk about something else? I'm knackered'."

After meeting at the 2013 Oscars, Adele and Lawrence have been seen at a few similar events throughout the years.

Interestingly, as per 'E! News', Adele seems to have a celebrity entourage that includes Drew

Barrymore. In October, the daytime presenter said on her talk

programme that their common friend and Richie's sister-in-law Cameron Diaz surprised her by inviting Adele to dinner at Barrymore's home.

"She called me one night and she is like, 'Okay, so I will be over there in like thirty minutes for dinner. Can I bring someone?'" Barrymore recalled.