'It's more than I could have asked for' 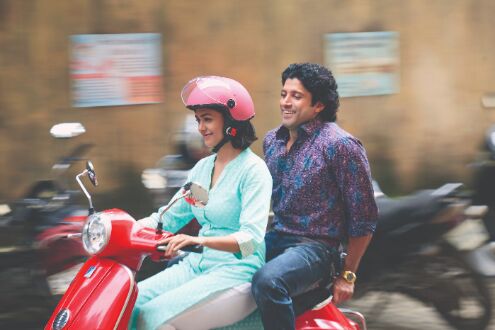 Actor Mrunal Thakur is just four films old but has already created a huge fan base in the industry. Her choice of roles has always been very brave and not just glamorous, thereby making a very strong statement that she is here to take risks and grow.

The actor's latest release 'Toofaan' is getting rave reviews from the audience. The movie also features actors like Farhan Akhtar and Paresh Rawal.

In an exclusive interview with 'Millennium Post', Mrunal talked about whether she feared getting eclipsed by established actors like Rawal and Akhtar or not. "I never got scared of being overshadowed but there was definitely a lot of performance pressure. However, when I met Paresh Rawal ji and Farhan things changed. They embraced me and treated me as part of the family. And I think that's where the confidence in me came from. If today, audience can see the confidence and strength in Ananya (Mrunal's character in 'Toofan'), it's because of my co-actors. A lot of credit goes to them as well. They supported and encouraged me throughout the shoot; and always appreciated me for doing good," said the actor who plays a doctor in this Rakeysh Omprakash Mehra directorial.

She added, "Moreover, I was really happy to be working with the dream team – not just actors but the technicians. Jay Oza was the cinematographer, Pranav Shukla was the sound designer and Abhilasha did the wardrobe. It was really difficult for each one of them as we shot most of the film in real locations. For example, most people don't know that most of the films get dubbed later and syncing the sound to the video is a very demanding process. But my sound designer made sure that it is synched well and no emotions get faded or compromised. I am really happy with the way the film has been shot, directed and the way it sounds. And trust me, this was something I had never asked for. I got way too much. Working with people who are dedicated to their work and have immense love for cinema has been a great learning experience for me. All of them have taught me a lot and I will forever be a student with them."

For the film, Farhan made several sacrifices, be it physical, emotional, or mental. But what was the preparation like for Mrunal?

Answering the same, Mrunal revealed she did not have to go under any physical transformation but there was a lot of 'mental preparation' involved.

"If I (Mrunal) do not have the strength in me, how will my character show it? That's the reason I needed to be very strong and confident to play Ananya. I had just one thing in mind - no matter what's going on in my personal or professional life, I have to own this moment and inspire the people. And fortunately, I was able to do that. The scene where I point two fingers at Ajju Bhai (Farhan's character) has inspired so many people. Whoever I am meeting these days is thanking me for introducing them to their inner self. All of us have two choices to make but we never listen to our inner voice, and Ananya just made everyone notice it."

Mrunal is extremely happy that roles like Ananya are being written in today's time. "Actresses have always been shown as the support system but Ananya is independent. She does not force her decision on others and rather introduces them to what's right and what's wrong. My biggest takeaway from this movie is that Mrunal has become more decisive than she ever was," she concluded.