'It just validated my hard work'

Set in Kutch, Gujarat, the sports drama stars Pannu in the title role of a gifted athlete and is directed by Akarsh Khurana 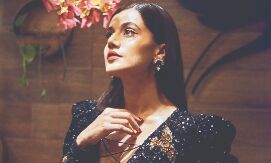 Actor Taapsee Pannu, who plays the role of a sprinter in her upcoming film Rashmi Rocket, on Thursday said her film is her way of questioning the patriarchal notions about what's feminine and what's not.

Set in Kutch, Gujarat, the sports drama stars Pannu in the title role of a gifted athlete and is directed by Akarsh Khurana, who has made Irrfan Khan's "Karwaan".

The trailer of the film shows Rashmi (Pannu) being subjected to archaic gender testing that is performed on female athletes and how she faces discrimination for not being conventionally feminine.

Recently, a user on Twitter commented on Pannu's physique as a manly after she posted a picture of from the film. Pannu said the comment validated her efforts as these are the boxes that she wants to shatter through the film.

"Who defines what's feminine and what is not? Is it just about your muscular build that you will be judged on who is a female and who is not? Do you realize that there are some hormonal imbalances that are there in certain females by default, it is not their choice? It might be a result of that they end up having the kind of physique that they have, the 34-year-old actor said during the virtual press conference of the film's trailer launch.

The actor said she may have taken the comment as a "compliment" because she worked extra hard to build a certain physique for the film, but it would be heartbreaking for someone going through an hormonal imbalance to hear that.

It is their (athletes') job to make that kind of body That's what they are supposed to do, build their body strong enough... Are we really asking these women to change their genetics to fit into the definition of what a female should be? Who gave you the right?" she added.

"It was a big compliment (Twitter comment) because it validated my hard work that I had put in for the film. I had to work double hard to get this kind of physique to get into the character of Rashmi.

The film is written by Nanda Periyasamy, Aniruddha Guha and Kanika Dhillon.

Khurana said the team paid utmost attention to doing research on gender testing in sports, which is central to the film's conflict.

"But then the lines got blurred and it became like a norm and no one bothered to question the ethics of it. Then it became something so discriminatory. That is the debate that the film is about. The most important freedom is to be who you want to be, he said.

In today's times, it is an outdated thing. Today we are progressing with homosexuality or race or religion. For this rule and law and test to exist is very surprising, he said, adding, he Googled the issue and was surprised to learn about it.

Abhishek Banerjee, who is seen playing the role of a lawyer in Rashmi Rocket said through the film he learned about the loopholes in the system.

I was taken aback when I learned about the loopholes in the system... Athletes have to go through a lot of hardships and we talk about them only during the Olympics and it is not a regular conversation in life.

Pannu said this was the story that she chose to do as she wanted to highlight the struggles that women athletes face in the country.

This film is very special in a different way. I've always been approached when either the script or the director is ready to make the film but one line of this story fell in my lap in Chennai and then from there to it becoming a full-fledged film has been a feeling I haven't experienced with any other film before.

"Everyone was just so sure about the story from day 1 that it was never a tough job to convince any of the stakeholders to join hands and give their best for this film. Hence the result of this film will affect me a lot more than my other films. Also, I'm extremely proud of it.

The film is backed by producer Ronnie Screwvala's banner RSVP, along with Neha Anand and Pranjal Khandhdiya.

Manish Kalra, Chief Business Officer, ZEE5 India said in "Rashmi Rocket", they have a riveting, relevant and it will have viewers cheering, empathizing and questioning. "It's cinema that moves you," he added.

Screwvala said the film highlights the many obstacles that society and the system throw at talented youth who do not reach their full potential or even have opportunities owing to that.

Pranjal Khandhdiya of Mango People Media, who was attached to the project since the beginning, said unlike other sports dramas, this film isn't just about struggles on the field, but in life; struggles that women in the sports arena continue to face.