'It is a journey with lots of twists and turns' 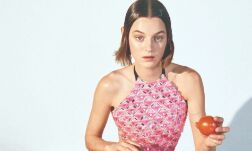 The Crown' star Emma Corrin, who shot to fame after essaying the role of Princess Diana on the 'Netflix' show, recently addressed her coming out the journey for the first time in an interview with 'ITV'. Corrin initially came out as queer in April of this year and in July, announced her new pronouns as she/they. In her recent interview though, the actor spoke about her decision to come out and the support she received from the LGBTQ+ community.

While talking about deciding to come out after first finding it 'scary', Corrin stated how visibility matters and said, "I think visibility is key with these things. My journey has been a long one and has still got a long way to go."

Corrin ahead of her interview, Emma had also shared an 'Instagram' post where she wrote how scary it was to address her queer identity for the first time on TV but mentioned that visibility is key.

After coming out, Emma celebrated her first Pride Month and also shared a post on buying her first binder as she advised her fans saying, "It is all a journey right. Lots of twists and turns and change and that is ok! Embrace it. Bind safely, find what works for you."