'It has just been very smooth' 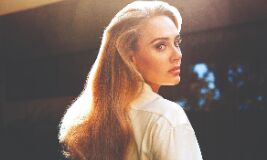 Adele's concert special, 'One Night Only', recently released on 'CBS' and as a part of it, the 33-year-old singer also sat down with Oprah Winfrey to discuss her new album and talk about it was her divorce that served as an inspiration for it. During the same interaction, Adele also touched upon her new romance with Rich Paul and defined it as 'smooth'.

status following their outings together.

While discussing the same, the singer gushed about what made him a great partner as she said, "He is just hilarious. Oh, he is so funny. He is hilarious, yeah. And very smart. You know he is very smart. It is quite incredible watching him do what he does. And just the easiness of it."

Adele added, "It has just been very smooth," via 'People'.

The British singer further also mentioned why this relationship remains special for her as she revealed that this is the first time when she is open to loving and being loved by someone else.

During the concert special, Adele performed some of her biggest hits including 'When We Were Young', 'Someone Like You' and 'Rolling in the Deep' along with new tracks from her upcoming album '30'. The star-studded concert had in attendance several fellow artists including Selena Gomez, Lizzo, Drake and other Hollywood celebrities such as Leonardo DiCaprio, Kris Jenner, Ellen DeGeneres, Gayle King, James Corden and many more.

Although one of the most special guests of the evening was her nine-year-old son Angelo who she shares with former husband Simon Konecki.