Home > Entertainment > 'Inside Edge Season 3' is a testament in itself: Farhan
Entertainment

'Inside Edge Season 3' is a testament in itself: Farhan 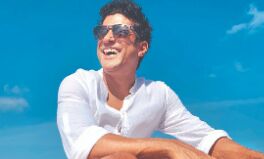 Actor-filmmaker Farhan Akhtar said the perfect marriage of cricket and entertainment is the reason behind the success of his 'Amazon Original' series 'Inside Edge'.

The third season of the show, produced by Ritesh Sidhwani and Akhtar's 'Excel Media and Entertainment', will start streaming on 'Prime Video' on December 3.

'Inside Edge', which premiered in 2017, explores themes of power, money, fame and the mind games behind the sports scene in the game of cricket.

What also adds to the popularity of the series is the fact that it engages people 'across all ages and genders', Akhtar added.

The show has drama, thrill, sporting action, the emotional upheaval and disappointment that it can bring when people are watching the game. There are some fantastically written characters.

"The fact that we are in season three is a testament in itself that people have enjoyed this world and characters and are wanting to see more," the producer said at the trailer launch of the show's upcoming season.

"Unfortunately, the lockdown did not allow us to show it earlier but here we are. Things are coming back to normal and we hope people like it," Akhtar added.

Anshuman described the third season as the most complex and satisfying one yet.

He said, "We have women taking the centre stage as they are calling the shots. We are also looking into the politics of cricket and what goes into the dirty business of broadcast it is fiction, these are the few themes."