'Industry now looks at me in a new light' 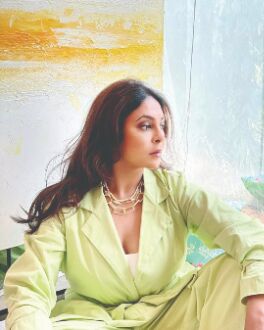 Mumbai: Bollywood actor Shefali Shah shares that her recent script choices have helped directors see her in a different light. She believes the industry has now started trusting her with headlining projects, which was not the case earlier.

After a lull around the mid-2010s, Shah, a powerhouse performer whose career in television and cinema spans almost two decades, saw a revival with filmmaker Neeraj Ghaywan's short film 'Juice' (2017).

She followed it up with consecutive acclaimed performances, starting with 2018 film 'Once Again', 'International Emmy Award' winning 'Netflix' series 'Delhi Crime' (2019) and Kayoze Irani's segment in the anthology film 'Ajeeb Daastaans' for the streamer earlier this year.

In an interview with PTI, Shah said that she can sense a change in the way the industry, which had once slotted her in mother roles, is viewing her today.

"The industry has started looking at me in a new light. The OTT has taken it up to another level. 'Juice', 'Once Again' and 'Delhi Crime' are my turning points. With 'Delhi Crime', the industry suddenly realised that they can put me in the central character," said the 48-year-old actor.

Citing the example of 'Ajeeb Daastaans', in which she played a woman who finds love outside her marriage, the 'National Award' winner said she was surprised the way actor-director Irani placed her - putting her in the spotlight as the lead of a romantic drama.

"Even Kayoze took that chance on me. When we were talking about styling and make-up for the film, I told him, 'Please, seriously'. He told me, 'But you are a quintessential 'Dharma' heroine and you have to look like that' and I just went, 'Are you kidding me?! I am the wrong person'," she recalled.

Shah added, "If in my 40s, people can see me doing leads, carrying projects on my shoulders and being one of the primary characters, it is great."

Though Shefali was always acknowledged as a fine actor right from her breakthrough role in Ram Gopal Varma's 'Satya' and later in Mira Nair's movie 'Monsoon Wedding', she went through a frustrating period when exciting work did not come her way.