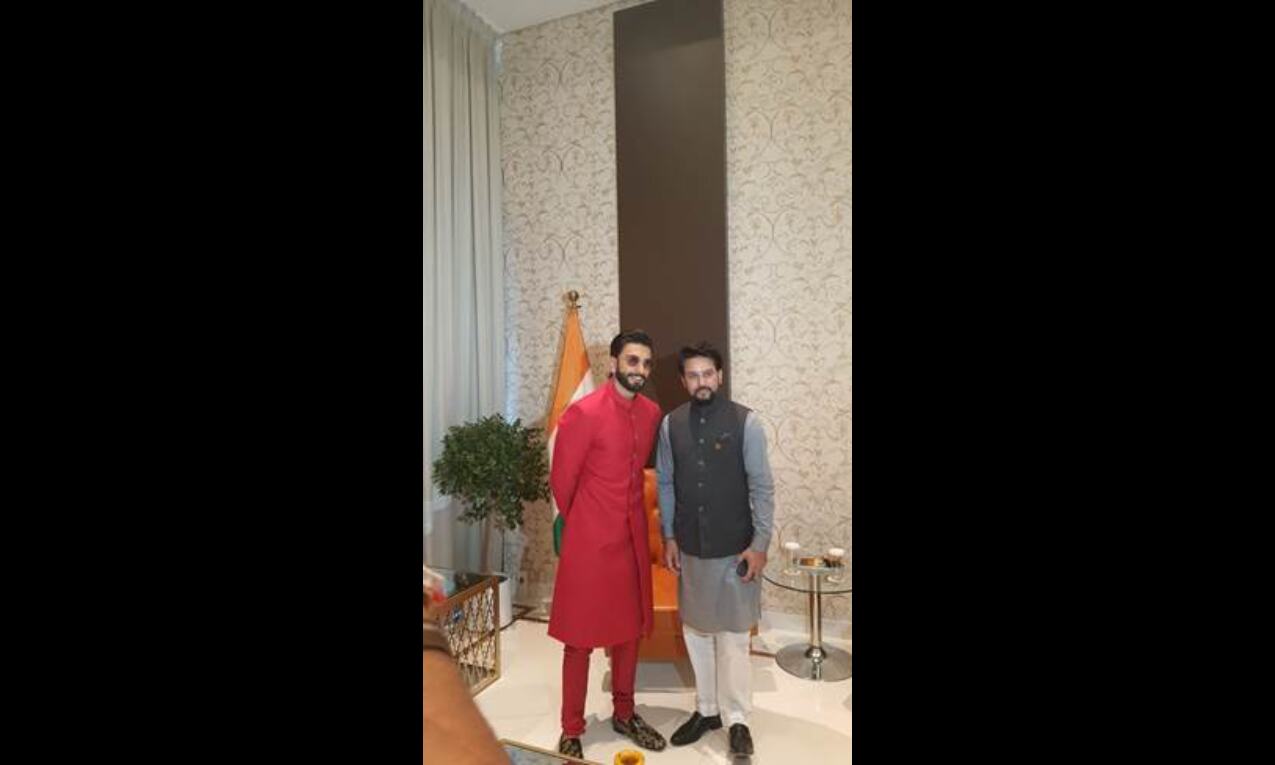 On the third day of his visit to Dubai, Union Minister for Information and Broadcasting, Anurag Thakur, on March 28, held a conversation with Ranveer Singh on 'The Global Reach of Indian Media and Entertainment Industry' at the India Pavilion at Dubai Expo 2020.

The Minister said that the Indian people in Dubai are the real brand ambassadors of India. The India Pavilion has been a huge crowd puller with 1.7 million visitors. He added that the country is celebrating 75 years of India's independence and the celebrations are taking place not just in India but abroad also.

Acknowledging the contribution of films to India's soft power projection, the Minister said that India is a land of storytelling and the film industry has left a great impact on people of foreign countries who identify India for its films. He added that he aims to make India the content sub-continent of the world. This can generate millions of jobs in India and help create content for the whole world. He acknowledged the acting talent powerhouse, that is Ranveer Singh, recalling his acting in various movies.

Ranveer Singh said that Indian content is on the cusp of making its presence felt on the world stage. He added that Indian entertainment is going to explode globally. He also shared that our stories resonate with people and transcend cultural boundaries and Indians abroad connect with India through films.

Ahead of the lively discussion, the Minister, along with Ranveer Singh, took a tour of the India Pavilion at Dubai Expo 2020.

Earlier during the day, the Minister held a discussion with Issam Kazim, CEO of Dubai Corporation for Tourism and Commerce Marketing, on various strategies adopted by Dubai in respect of the tourism sector to make it a preferred tourism destination for the world. During the meeting, the Minister commended Dubai for organising the Expo which has been a great success despite the pandemic. Highlighting the importance of Dubai on the tourism map of the world, the Minister remarked that Indians have preferred to fly to Dubai over western capitals like London during these pandemic years.

Issam Kazim mentioned that Dubai's success has been possible owing to decisive leadership with a focused target. He talked about Dubai Authority's strategy during COVID when the city was shut down in March 2020. The authorities adopted a completely new strategy and ensured restrictions and protocols. Vaccinations and PCR tests were made mandatory for travellers and Dubai was the first city to open up for tourists.

Kazim mentioned that Dubai is targeting to get 25 million tourists by 2025 and become the world's most visited city. The city focuses on aspects like marketing Dubai so that people feel comfortable coming, making it easier to set up businesses, promoting Dubai as the best city to live in, promoting FDI, inviting tech companies, improving connectivity through Emirate airlines and infrastructure development. He also mentioned that Dubai is also exploring the cryptocurrency space, although it is risky and unregulated for now.

He highlighted that India has great tourism potential. India can utilise the unique aspects of key cities/states and focus on their strengths. Also, India's IT talent benefits the global industry which can be promoted as a strength.

Anurag Thakur extended a warm invitation to Issam Kazim to India to discuss further collaboration opportunities in the tourism and media and entertainment sector.