'Indian cinema will never be the same' 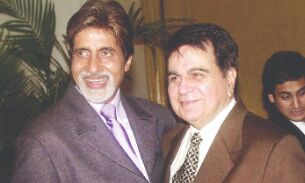 New Delhi: Whenever the history of Indian cinema will be written, it shall always be 'before Dilip Kumar, and after Dilip Kumar. That's what actor Amitabh Bachchan tweeted as he paid tribute to his favourite actor and screen icon Dilip Kumar.

Dilip Sahab introduced Indian film industry to the concept of superstardom and paved way for the entry of a number of newcomers. Though he wasn't formally trained in acting, Kumar served as an institution for generations of actors.

Soon after the news of Dilip Kumar's death was announced, social media was flooded with tweets from film personalities as well as his fans.

Mangeshkar wrote on Twitter that Kumar's health struggles had been going on for many years and lauded the actor's wife, veteran actor Saira Banu, for taking utmost care of him.

"Yusuf Bhai was ill for the last many years, could not recognise anyone. At such a time Saira Bhabhi left everything and served him day and night. There was no other life for him. I bow to such a woman and pray that Yusuf Bhai's soul rests in peace," she tweeted.

In his Instagram post, alongside a beautiful picture, Amitabh Bachchan wrote "An epic era has drawn curtains... Never to happen again. My duas for peace of his soul and the strength to the family to bear this loss. Deeply saddened."

Akshay Kumar tweeted that the legendary actor's passing away has left a huge void in the film industry.

"To the world many others may be heroes. To us actors, he was The Hero. #DilipKumar Sir has taken an entire era of Indian cinema away with him. My thoughts and prayers are with his family. Om Shanti," he posted on Twitter.

Kamaal Haasan also shared a photo with the legendary star, saying that Kumar was an "unrivaled" personality of Indian cinema.

"He has been a bridge of reconciliation between the people of India and Pakistan. He cares for the poor. Tribute to the protagonist who lived to the fullest," he tweeted.

Anil Kapoor, who worked on with Kumar on three movies – 'Shakti', 'Mashaal' (1984) and 'Karma' (1986), said the veteran actor was a close friend of his father, producer Surinder Kapoor.

"Our world is a little less bright today because one of our brightest stars has left us for the heavens. Dilip Sahab was very close to my father and I had the tremendous honour of sharing screen-space with him in 3 of my most memorable films...

"He was and will always be the finest & greatest actor of our industry for me...he has inspired generations of artists. Rest in peace Dilip Sahab. You remain in our minds and hearts forever," he said in a brief statement.

Subhash Ghai, who worked with Dilip Kumar in films like 'Karma' and 'Saudagar' (1991) said the actor's passing away was the "saddest day" of his life.

Filmmaker Hansal Mehta remembered Kumar as one of the "greatest" actors and wrote, "There will never be another Dilip Kumar."

Remembering Dilip Kumar, actor Divya Dutta said, "He has been an icon for everyone. An institute that is unparalleled. I have seen all his movies with my mother – be it Mughal-E-Azam, Azaad or Saudagar. My mother's biggest desire was to meet him and I think she was happiest the day she met him." Divya said, the most memorable moment for her was when she saw the coloured 'Naya Daur' while sitting next to Dilip Sahab."

Kavita Seth said, "He is a school of acting, a man of grace, tameez aur tehzzeeb ka ek nek prateet, Dilip Kumar Saab's passing into the pages of history is that moment when life stops in admiration of a life well-lived."

Shilpa Shetty wrote, "From being called the 'Tragedy King' to being an institution yourself for every generation of performers thereafter, there will

never be anyone like you, Dilip Saab. Your legacy will live on forever."

"Every now and then some individuals come along who single-handedly alter the present and write history. One such legend was Dilip Saab for the rest of the world of cinema. I was fortunate to have spent some time with him both on and off screen and I will cherish those memories forever," said Madhuri Dixit.

TV actor Urvashi Dholakia also said, "I have been very fortunate enough to work with him so closely where he has practically sat down and taught me Urdu. I remember because Saira ji was attempting to be a producer and this goes back many years ago in 1999 and I was playing the main part in that project. It was a beautiful show and we had shot the pilot episodes and it was an experience that I cannot ever forget where Yusuf ji, Saira ji and Naseema Bano ji (Saira ji's mom) used to be on the set making sure everyone is taken care of properly."