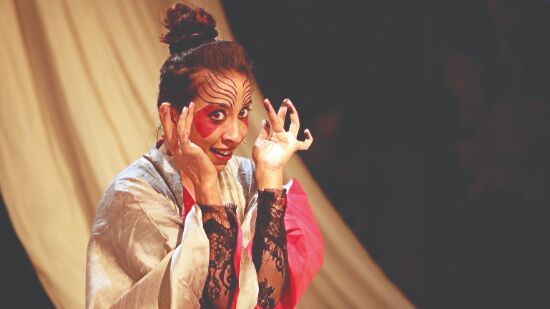 India International Centre' (IIC) has started its annual 'Festival of Arts 2021' from October 22, 2021, and it will continue till October 26, 2021. This colourful festival includes events like exhibitions, food festivals, film screenings, plays, musical sessions and lectures on various topics to keep the audience engaged in this five-day event.

On October 22, exhibitions 'Kshetraja' and 'Flights of Materiality' took place at the Conference Room and Gandhi - King Memorial Plaza.

'Kshetraja' is an exhibition of prints from the collection of the National Gallery of Modern Art, which was inaugurated by Dr Meenakshi Gopinath, 'Life Trustee'. The exhibition will remain on view until October 26 from 11 am to 7 pm.

'Flights of Materiality' is an exhibition of sculptural forms by GR Iranna, HG Arunkumar, Karl Antao, Shambhavi and Puneet Kaushik. It was inaugurated by NN Vohra, President, IIC. The exhibition will remain on view until October 30 from 11 am to 7 pm.

At 6:30 pm, IIC President NN Vohra inaugurated the arts festival, which was followed by 'Shiva - Facets of Him', a choreographic work in Bharatanatyam presented by Vaibhav Arekar and artists of Sankhya Dance Company from Mumbai.

To celebrate the centenary year of Satyajit Ray, a legendary filmmaker, writer, illustrator and music composer, 'Pen, Ink, Action: Satyajit Ray at 100' festival has been organised. Classic black and white feature films, films from the 'Calcutta Trilogy', period pieces, a children's film and Ray's all-time favourite film will be screened during the five-day event at CD Deshmukh Auditorium.

'A King's Gambit', an exhibition of original period costumes created for the 1977 film by Satyajit Ray, 'Shatranj Ke Khilari' (The Chess Players) has started on October 23. Based on research and original sketches by Ray himself and Shama Zaidi, the costumes were created by local dressmakers. Apart from costumes, the display also includes footwear, turbans, costume jewellery, stills and working stills and copies of letters and pages from Ray's kheror khata (script book). The exhibition will remain on view until November 5 from 11 am to 7 pm at Art Gallery, Kamaladevi Complex.

On October 24, a Hindustani vocal recital will happen at Fountain Lawns by Vidushi Shalmalee Joshi, Jaipur (Atrauli Gharana). She is the daughter and disciple of Madhuri Kulkarni, Pandit Chintubuwa Mhaiskar and late Pandit Ratnakar Pai. She will be accompanied by Tejovrush Sunil Joshi on tabla and Vinay Mishra on harmonium.

The events of October 25 will begin at 11 am with 'Glimpses of World Cinema', a festival of film screenings from Germany, Hungary and Spain. On the same day, 'IIC Quarterly - Indian Cinema: Today and Tomorrow: Infrastructure, Aesthetics, Audiences (Winter 2020-Spring 2021) will be released by guests.

Apart from these activities, IIC has also organised food festivals during the five-day event by different chefs presenting their cuisines to people.