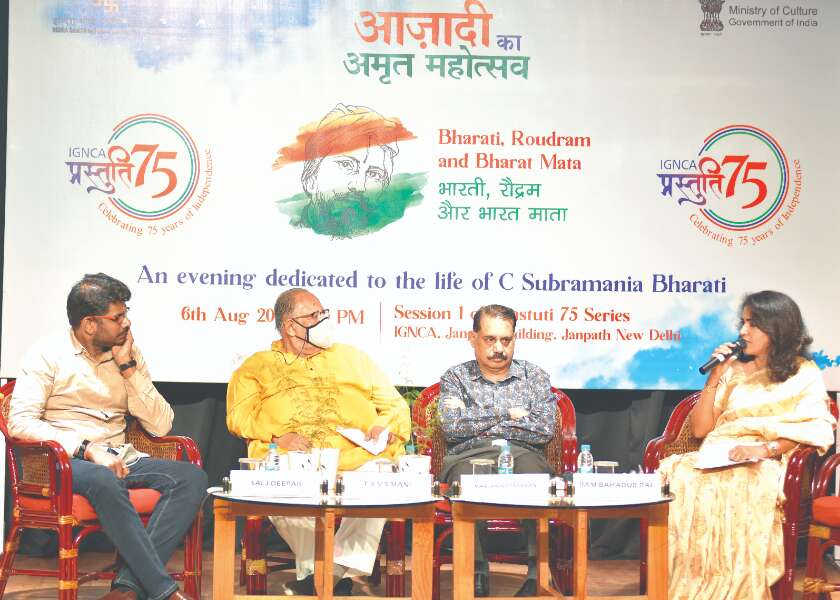 Indira Gandhi National Centre for Arts organized an event under 'Aazadi ka Amruit Mahotsav' - an evening dedicated to the life of C Subramania Bharati at its auditorium situated in the heart of Delhi, The Janpath Building.

The evening started with renowned journalist and author Ram Bahadur Rai, who is also the president of IGNCA Trust, giving a keynote address to brief the vision of the programme. He described Bharati as a patriot, poet and spiritual man whose life was dedicated to the society.

Following the keynote, prominent personalities like Sai Deepak J, author and lawyer Supreme Court, Professor TKVS Mani, a historian and classical music expert and Maalan Narayanan, journalist and renowned Tamil author participated in a panel discussion, which was moderated by Dr Priyanka Mishra, IPS and Director Admin of the organization. The discussion highlighted S Bharati's love for Tamil Nadu as well as India. He died at the age of 39 but managed to give right direction to the anger in the youth of his generation, which is quite inspiring for the present society as well.

In the last session, the recording of Bharati's poem recited by Member Secretary Schhidanand Joshi enthralled the audience. Later, an English translation of Bharati's poetry was nicely described by Usha Rajagopalan. Later, a beautiful performance of Bharatnatyam was given by various artists. The vote of thanks was finally given by Joes Kuriakose, Project Director, IGNCA. Jan Gan Man was performed by special friends from the Avacayam Society for Child Development.