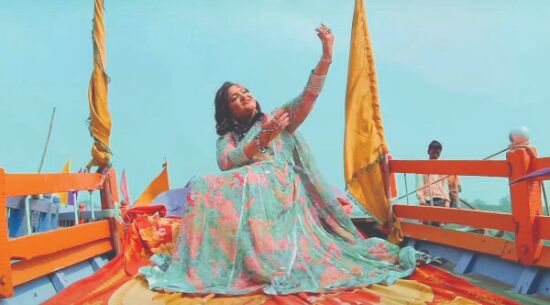 Having proved her mettle in her debut devotional song, the senior Punjab bureaucrat Rakhee Gupta has come up with another devotional number. The song 'Aiso Man Hoye' sung by the 1997-batch IAS officer was premiered on YouTube by T-Series on Monday. The song is composed by Devender Dev and celebrates various facets of Krishna's childhood.

Composed in an innovative style, her second attempt dedicated to Krishna is a natural corollary to her first song that sings praises of Krishna's consort Radha.

The song, set against some of the most picturesque pilgrimage sites including Vrindavan and ISKCON temple, celebrates Lord Krishna's childhood in more than one way.

The video shows Rakhee absorbed in religious ecstasy and transported to a world – divine and pure. "Music is the food for the soul and more so when it celebrates god," Rakhee Gupta says.

The solo number goes on to prove that Rakhee Gupta – the IAS officer presently serving the Punjab Government as Resident Commissioner of Punjab at New Delhi – can deftly combine her passion for singing with her demanding job profile. Besides singing, she also shares a flair for writing and poetry.

Rakhee has already proved her acumen as an officer. She has been awarded the coveted Stree Shakti Puruskar for her administrative and leadership qualities. She also has many prestigious assignments to credit. A recipient of the President of India's Silver Medal for Census Operation in 2001, Rakhee Gupta was deputed by GOI to Bhutan for overseeing the first Parliamentary elections as a National Observer. She also served NIFT as Director, Joint Secretary, Home Affairs and Deputy Commissioner Faridkot.