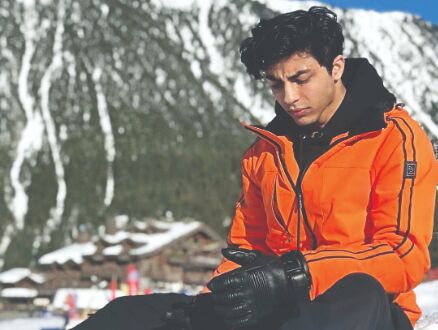 Shah Rukh Khan's son Aryan Khan was produced in the court for the hearing of the interim bail plea, a day after a metropolitan magistrate court sent all eight arrested in the cruise rave party case to 14-day judicial custody. Aryan through his lawyer Satish Maneshinde told the court that he is a 23-year-old with no prior antecedents. The chats that the Narcotics Control Bureau has been referring to took place when Aryan Khan was abroad.

"I am a 23-year-old with no prior antecedents. I happen to be from Bollywood. I went on an invitation, refused when asked if I have drugs. They were honest not to accuse me of anything else. Data from my mobile has been retrieved and sent for forensics," he said through his lawyer Satish Maneshinde, as reported.

"I have parents and a family here. I have an Indian passport and I am not going to abscond. There is no question of tampering," lawyer Satish Maneshinde said.

He added, "There is not a single material to disclose any commit any conspiracy. No material has been found on me or in my bag. Where is the material to prosecute? It is a well-settled position that the offence is bailable and non-bailable according to my learned friend."

"High Court has always been liberal in granting bail even though the prosecution always opposes it. Since I am not found in possession of anything I cannot be trucked with them," he said.

He also referred to statements by the Supreme Court, which earlier said interrogation, investigation and confrontation of the accused with others could take place even after bail.

"Supreme Court says do not play around with the fundamental rights of citizens. They should not stand on technicalities. They should go by merit. There is no case on merit," he added.

"Search and seizure can not be cited just to lock me up in the jail. The normal tendency of the court is to grant bail. There is an accusation, there is no material. I was abroad when those chats happen," Aryan Khan's lawyer said. The agency sought the custody of the eight claiming that the custody was needed to confront them with the new arrests that the agency has made in connection with the case.