'I wanted to tap that side of romance' 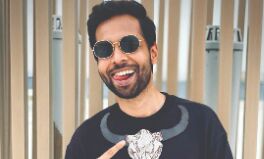 Mumbai: Abhishek Banerjee said he got an opportunity to explore the romantic side of his personality in the upcoming 'Netflix' anthology 'Ankahi Kahaniya', in which he plays a salesman named Pradeep, who finds a companion in a mannequin.

The 36-year-old actor, best known for his performances in the horror-comedy feature 'Stree' and 'Amazon Prime Video' web series 'Paatal Lok', said he was thrilled when the offer to play the lead in a film that revolves around the theme of love came his way.

"I wanted to tap that side of romance. I also knew that it is going to be very difficult because probably from whatever training I have got and whatever kind of work I have done in my theatre days and later the kind of movies I was doing, I was nowhere close to playing a romantic hero," he shared.

Banerjee, who features in Iyer Tiwari's segment, said the anthology is his attempt to avoid being pigeonholed by producers.

"I knew this is quite something out of the comfort zone. I thought this is going to be very interesting because probably now, people are trying to set me in a particular image or trying to set me in a stereotype, even though I have done varied roles. So, this allowed me to probably break that," said the actor.

Banerjee said what also excited him about the film was the exploration of the idea of romance in a new way.

"I knew this is the opportunity where you can try and feel a different kind of romance. And it might be something, which is not borrowed from the films which we see. Whatever we are in our real life, we have an influence of a particular romantic structure in our mind, which is given to us by society or whatever we see. But to not be that and be brutally honest with your romance is what I wanted to attain as that is what the film is all about," he revealed.