'I relished playing a boxer in Toofaan'

Popular film actor Farhan Akhtar says when he saw Aamir Khan in ‘Rangeela’, he wondered how fun it must have been for him to play a character that can say whatever he feels like. So, when he got a chance to do this film, he relished it 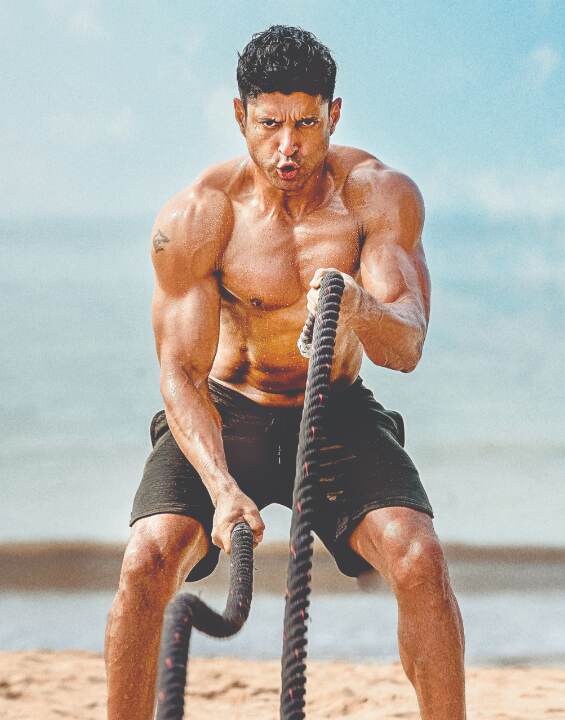 Actor Farhan Akhtar, during the trailer launch of 'Toofan', said he "relished" playing the role of a boxer in his upcoming film, a part that reminded him of Aamir Khan's flamboyant Munna, a film ticket-seller in the black market in the 1995 hit film 'Rangeela'

Akhtar, who worked with Khan in his directorial debut 'Dil Chahta Hai' 20 years ago, said he always wondered how fun it would have been for the superstar to have played a character with a devil-may-care attitude.

"I loved playing Aziz Ali, this let-your-hair-down kind of part. When I saw Aamir Khan in 'Rangeela', I wondered how fun it must have been for him to play a character that can say whatever he feels like. There is a carefree attitude. When I got a chance to do this film, I relished it," Akhtar said in a virtual press conference of the film, slated to be released on Amazon Prime Video on July 16.

Billed as inspirational sports drama of a goon called Aziz Ali aka Ajju Bhai from the streets of Dongri, 'Toofaan' is set against the backdrop of boxing and charts the fall and triumphant comeback of its lead.

Shot in Nagpada, a neighbourhood in south Mumbai, the film is directed by Rakeysh Omprakash Mehra, and penned by Anjum Rajabali and Vijay Maurya.

The 47-year-old actor credited co-star Hussain Dalal, who is from Nagpada, in helping him get into the skin of the character.

"Hussain is from the area where we shot. He knows the lingo, body language and those people inside out. Vijay Maurya's dialogues also added to the enjoyable experience."

Akhtar also thanked the people of Nagpada, saying "We felt so welcome. It was like shooting with friends."

The actor, who is also credited as producer alongside his partner Ritesh Sidhwani of Excel Entertainment, said the film's underlying message is: There is no point in judging anyone.

"All of us, at some point in our life, have been guilty of labelling or judging somebody based on certain labels that come attached with a person. Whether it's religion, caste, skin colour, social demographic or level of education. When you meet somebody and you tick three-four boxes, it gives you a sense that 'this is this kind of a person', we all have been guilty of that. This film challenges that notion on a big level," he told reporters.

"If you want to try and read someone, it cannot be such a broad opinion based on a generic set group. It is important to take the time to understand that person individually, to form an opinion about someone," he added.

Calling Thakur's character "an important catalyst" in Aziz's life, Akhtar said it is important for people to have the right support system and structure for them to reach their true potential.

"You can be more than what the world has dealt you. You can use your skills because everybody has a talent. It may not be recognised, be untapped or may go unnoticed for your entire life...

Thakur, who plays a doctor named Ananya in the film, said she has started doing MMA (mixed martial arts) after working on 'Toofaan'.

"I feel so fit. I want to be in the ring and fight. Somebody asked me 'why are you learning all of this? Is there a 'Toofaan 2' coming up next?' I said 'I wish', but it is important to learn at least one sport. The film made me a better person altogether," she added.

It was also a first for Rawal.

The veteran actor, who plays coach Nana Prabhu to Akhtar's Aziz, said he has never done a role like this where he had to be so much physically involved.

"I'm someone who jogs for an hour or so. When I was training to play the coach, I used to start sweating in barely 5-10 minutes. I thought this was the best cardio exercise. All this training helped me both physically and in my preparation for the role. I also got to learn something new," he said.

"Whatever my limited experience in training for the film, I had a lot of fun. When I used to go home after the shoot, I would tell my children that if I was 20-25 years younger, I would have pursued boxing for fitness," he added.