Home > Entertainment > I know for a fact that I will never be misused: KK Menon
Entertainment

I know for a fact that I will never be misused: KK Menon 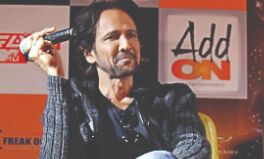 Kay Kay Menon said it is important to deliver a 'believable' performance to make the audience connect better with a story.

Regarded as one of the most versatile contemporary performers in Bollywood, the 55-year-old actor is most popular for his outing in 'Hazaaron Khwaishein Aisi', 'Black Friday', 'Gulaal', 'Shaurya', 'Bheja Fry', 'Haider', 'Baby' and 'Ray'.

He is presently garnering praise for his authentic and nuanced performance as RAW agent Himmat Singh in the recently released espionage thriller series 'Special Ops 1.5: The Himmat Story'.

Menon added, "Whatever you do in a world it should seem close to believable. Sometimes you succeed, sometimes you do not, but that is a different issue. So, it is always better to go with that approach so that the audience members are kind of a part of it rather than watching you and getting bamboozled."

Asked about the next show in the franchise, Menon said nothing has been discussed yet. But he is confident that he would not be 'misused' as a performer by Pandey.

"Neeraj's mind is as secretive as a RAW agent. Suddenly he comes out one day and says, 'This is what I am making' and normally that moment is brilliant. What he comes out with is extremely new and unexpected," admitted Menon.

He concluded, "So, I'm waiting

for that. With Neeraj and Shital, I have blind faith and I know for a fact that I will never be misused."