'I have no desire of becoming a Bollywood star' 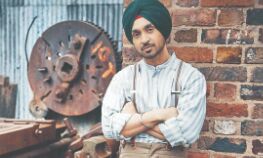 Singer-actor Diljit Dosanjh clammed up after he was asked if he enjoyed his time in Bollywood. After initially saying that he would prefer to remain silent, he said, "Those actors can be lions in their own dens."

In an interview, the 'Udta Punjab' star said that he does not care about whether he cultivates a successful career in Bollywood, as he has absolute control when it comes to his music. He said that nobody can stop him from making the kind of music he wants to and that he is proud of the fact that Punjabi singers are mostly independent.

"I have no desire of becoming a Bollywood star. I love music and without anybody's say, I can make my music. No superstar can tell me that this music would not work or that someone else's song would work better as none of this works on me," he said in the interview.

to. I do not care about getting work in Bollywood."

Asked if he had a good experience in the Hindi film industry, Diljit laughed wryly and replied: "If I speak up about it, it will become a big deal."

crazy about anybody; no actor, no director, nobody. They can be superstars in their own homes," he revealed.

Diljit appeared to second-guess the last statement, to which he said, "Perhaps I should have said this before."