'I had to live in the moment' 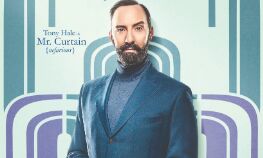 Mumbai: Actor Tony Hale, who is looking forward to the release of 'The Mysterious Benedict Society', says he followed the 'one day at a time' approach to stay focused while working on the upcoming series during the ongoing coronavirus pandemic.

Hale, best known for acclaimed series like 'Arrested Development' and 'Veep' and films like 'Toy Story 4', said the team shot for the show from August to October last year.

"All of us were wondering what the news was and what was happening. I had to try to stay present and live in the moment and it was easy to fall into 'what if this happens...' and I couldn't go there," the 50-year-old actor told PTI in a Zoom interview.

"We were shooting right in the middle of this crisis. It is difficult to not see similarities (between the show and the pandemic). The show talks a lot about all the noise that we hear on a daily basis whether through fear or creating anxiety and panic," he added.

Based on Trenton Lee Stewart's novel of the same name, 'The Mysterious Benedict Society' follows four gifted orphans who are recruited by the peculiar Mr. Benedict for a dangerous mission to save the world from a global crisis known as The Emergency, created by his evil twin brother, Dr. Curtain.

The children must infiltrate the mysterious L.I.V.E. Institute to discover the truth behind the crisis. When the headmaster, the sophisticated Dr. Curtain appears to be behind this worldwide panic, the kids need to devise a plan to defeat him.

When the offer to star in the series came his way, Hale said he was unaware about the book but fell in love with the mission.

"They told me about the whole concept, the emergency is happening and it is causing anxiety and panic. It has a whimsical element to it. My character of Mr Benedict is helping the gifted kids, who do not have magical powers but their superpower is their intellect and creativity, empathy. After the year we all have had, I would say those are our superpowers."

The series, which hails from Sonar Entertainment, 20th Century Fox TV and Jamie Tarsesa's Fanfare, has been written by Matt Manfredi and Phil Hay.

The Emmy winning-actor, who stars in the dual roles of the diametrically opposite twins Mr. Benedict and Dr. Curtain, said the series is about finding the "voices of truth" amid panic and confusion.

"What I loved about the show was that when the voices of truth and hope spoke out, everybody gravitated to them. And it is the same what we have been through amidst all the chaos and confusion when we had voices of truth of hope, everybody clung to those voices."

He doesn't bracket his roles as good or bad, Hale said, adding he connected more with the character of Mr Curtain.

"Curtain was misunderstood because of what he went through; he chose to go to manipulation and anger, whereas Benedict went to compassion and empathy. When I do any character I feel like I have to find characteristics within that character that I resonate with.

of a character rather than part of yourself. In Curtain, the misunderstood (part) I think I can find traits in him. Like there have been times in my life when I have been angry or something but (we have) to try and find spaces where you find humanity in characters," he added.