'I do not claim to be an activist' 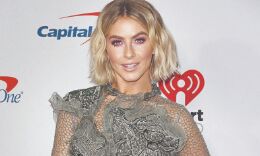 Julianne Hough responded to backlash regarding her upcoming reality series, 'The Activist', which also features Priyanka Chopra and Usher as judges. Produced by 'CBS' and 'Global Citizen', the series brings together six activists from around the world who want to bring meaningful change to universal causes, including health, education and the environment. Their success will be judged based on their social media campaigns. The premise of the show itself was slammed and labelled as insensitive and tone-deaf.

"The last few days have been a powerful demonstration of real-time activism. Thank you for using your voices, calling me in, your accountability and your candour. I am deeply listening with an open heart and mind," she wrote in the post.

She also mentioned some of the criticism she received about 'The Activist', called the show 'performative' and 'tone deaf'. According to Julianne, some said that 'the hosts were not qualified to assess activism' because they are 'celebrities and not activists'.

"I heard you say there was hypocrisy in the show because at the root of activism is a fight against capitalism and the trauma that it causes so many people and that the show itself felt like a shiny capitalistic endeavor," she added.

Hough further stated, "I also heard you say that trying to value one cause over another felt like the Oppression Olympics and missed and disrespected the many activists who have been killed, assaulted and faced various abuses fighting for their causes."

"And because of this, there is a feeling of insult, dehumanisation, insensitivity and hurt that is being rightfully felt. I do not claim to be an activist and wholeheartedly agree that the judging aspect of the show missed the mark and that I am not qualified to act as a judge," she continued.