'I aim at touching people's hearts' 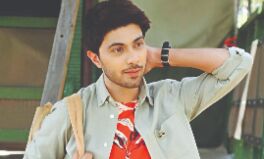 Adeeb Rais, whose directorial 'Kaali Peeli Tales' recently got released on Amazon's 'MiniTV', is enjoying all the appreciation coming his way. The anthology film is getting applauded for its unique storyline that revolves around characters going through the crossroads of change and acceptance in their relationships. It stars Vinay Pathak, Maanvi Gagroo, Gauhar Khan, Soni Razdan, Adeeb and many others.

In an exclusive conversation with 'Millennium Post', Adeeb got candid about' 'Kaali Peeli Tales'.

Speaking about working on the anthology, Rais explained, "It took me two years to complete this beautiful series, for which I'm getting great reviews and am happy about it! I wanted to make a series with different characters having their own identities, flavour and stories for the audience to understand and love them. Besides, the filming process was fun with the talented actors who coordinated well enough to make this project a success."

Throwing light on his 'vision' behind making 'Kaali Peeli Tales', the young and promising director stated, "Before I started working on the series, I had a much larger vision behind it - it was not just about bringing several great actors on board but also to create an anthology that people can relate to while enjoying at the same time. People love watching quirky and snappy content where the story is not dragged for too long. I'm glad to have made a series like 'Kaali Peeli Tales' which is being well received by today's audience," said Adeeb.

Rais also shared his love for creating anthologies. He said, "Making a short film is something that I enjoy a lot as it is fun to give life to shorter and meaningful stories. Moreover, In times like these when people have unlimited options (in terms of the available content) to entertain themselves with, 'anthologies' are receiving immense love. The anthology format is working well for OTT as anthologies are trending widely."

As a director, Adeeb believes in 'touching' people's hearts with stories that have a message attached to them.

"Through my films and series, I aim at touching people's hearts with messages that hold significant lessons. Even in my latest project 'Kaali Peeli Tales', I made sure to mesh in the emotions, thoughts and perspective in every character's persona and make it more relatable for people. After all, fiction is inspired by people's real-life experiences and so we directors bring out people's stories through actors," he admitted towards the end of the interaction.