'How amazing that a female-led film rocked the box office' 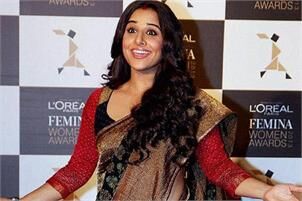 The idea of a 'perfect woman' is passe and women are being portrayed simply as individuals in the world around us, said actor Vidya Balan.

Her upcoming film 'Jalsa' is another addition to the list of movies, in which the 43-year-old actor has played flawed women, following 'The Dirty Picture', 'Ishqiya', 'Shakuntala Devi' and others.

"Previously it was the perfect, ideal woman. Today there is no ideal. Because we are being recognised as individuals in the world around us. Hence, there is that much more variety than you are getting to see in the representation of women onscreen. Today in films we are acknowledging the flaws, she is great the way she is. Because we have realised that the ordinary emerges from the extraordinary. We are telling ordinary women stories, which is what has happened," Balan said.

Citing the example of 'Gangubai Kathiawadi', directed by Sanjay Leela Bhansali, the actor said she is elated that the Alia Bhatt-starrer emerged victorious at the ticket window. The domestic box office collection of the period drama, which was theatrically released on February 25, amassed Rs 102.68 crore on March 10 as per the makers.

"There are other filmmakers, writers and actors who have done this. And we are all now with every film moving a step forward. Look at what is happening with 'Gangubai Kathiawadi'. How amazing it is that after two years when theatres opened it is a female-led film that has rocked the box office!" Balan added.