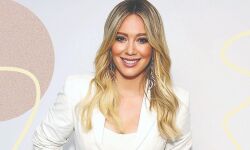 On August 21, Hollywood star Hilary Duff revealed that she tested positive for COVID-19.

Taking to her 'Instagram' handle, the 33-year-old actor shared a picture of herself lying in bed with a caption that read, "That delta? She is a little monster. Symptoms: bad headache. No taste or smell. Sinus Pressure. Brain fog. Happy to be vaxxed." The 33-year-old actress took to her Instagram Story to reveal that despite being vaccinated, she contracted the delta variant of COVID-19.

She made a follow-up post to her Stories today, asking her followers, "Should I do a makeup tutorial today?" with the poll options "DO IT GIRL" or "HECK NO SICK FACE," so the Younger star is in good spirits.

The news of the actor being COVID-19 positive came just days after she shared a picture from the sets of her upcoming sitcom 'How I Met Your Father', the 'Hulu' spinoff to 'How I Met Your Mother'.

"Who is ready for us? We may or may not have been sitting in front of a certain someone's apartment," she had captioned the picture.

According to 'The Hollywood Reporter', the 10-episode TV series 'How I Met Your Father' is set to follow Hilary's character – Sophia - who explains to her son how she met his father and her close friends. The comedy was given a straight-to-series pickup in April. It is unclear whether production of the show will be affected. Reps for Hulu did not immediately respond to Fox News' request for comment.