'Have sold rights to Go Goa Gone and moved on' 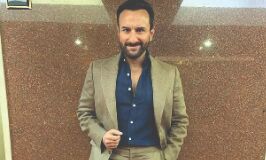 Mumbai: Saif Ali Khan said that he is no longer associated with the 'Go Goa Gone' franchise as a producer.

Khan, who also starred in the 2013 Hindi-language zombie black-comedy film backed the movie along with Dinesh Vijan and Sunil Lulla of 'Eros international'.

Directed by Raj Nidimoru and Krishna DK, 'Go Goa Gone' follows three men - played by Kunal Kemmu, Vir Das and Anand Tiwari - whose holiday to Goa turns out to be a zombie nightmare.

In the movie, Khan played the role of Boris, a Russian mafioso-turned-zombie hunter who is originally from Delhi.

Asked about the status of the film's sequel, the 51-year-old actor revealed, "I do not know about 'Go Goa Gone 2'. I have got nothing to do with it anymore. I sold all the rights and moved on from that sort of thing."

In an interview with a leading news agency last year, Vijan said the plot of 'Go Goa Gone 2' will centre around aliens, unlike its predecessor, which was a comedy about zombies.

"Zombie element would not be there as we are doing it with aliens. The world will be similar like the same emotion, same comic timing, like stoner comedy, but a new journey. We just need to give every actor, who was there in the first part, a little more like a 2.0 version and bring something new," Vijan had said.

Up next for Saif is the remake of the 2019 Tamil blockbuster 'Vikram Vedha', in which he will be teaming up with Hrithik Roshan. Their last outing was the romantic drama 'Na Tum Jaano Na Hum', which was released in 2002.

"I have seen the original 'Vikram Vedha' and I am very excited about shooting it with Hrithik for this new film," said Khan.

The shoot for 'Vikram Vedha' is expected to begin in November.

Khan is also looking forward to his other project 'Adipurush', the shoot of which commenced in February.

The multilingual period saga is an on-screen adaptation of the epic 'Ramayana', which features Telugu star Prabhas as Lord Ram and Khan as the antagonist Lankesh.