'Happier Than Ever' to stream on 'Hotstar' 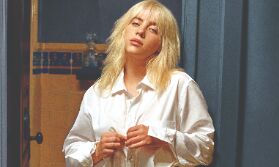 Billie Eilish's 'Happier Than Ever' concert film will be released on OTT streamer 'Disney+ Hotstar' for fans to cherish the singer's process of creating the entire album.

A Robert Rodriguez and Patrick Osborne directorial, the special film will explore the various themes of Eilish's new album along with taking them on a trip to her birthplace in Los Angeles.

Taking to her 'Instagram' handle, Eilish shared a new teaser image with her fans as she posed with her animated character from 'Happier Than Ever: A Love Letter to Los Angeles'.

Stating her excitement in the caption of the post, the singer said that the film will release on September 3. Previously, Eilish had also shared a trailer where she and her brother Finneas were witnessed to be performing in Hollywood Bowl.

Earlier, after the release of her album, she admitted not being able to 'process' that her album was finally out. According to Eilish, making 'Happier Than Ever' was the most 'fulfiling', 'satisfying and 'profound' experience for her.

"I love every song on this project so much that it scares me thinking about putting it out into the world for anyone to listen to," Eilish shared.

Revealing that she felt like 'crying', the 'Bad Guy' singer opened up about going through a period of 'self

realisation' while working on the album.