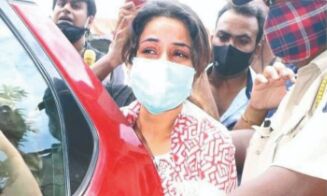 Actor and model Sidharth Shukla's last rites were held in Mumbai on Friday afternoon. His close friend Shehnaaz Gill and other Bigg Boss colleagues such as Asim Riaz, Arti Singh, Rashami Desai and Nikki Tamboli attended the funeral at the Oshiwara crematorium.

While the last rites were conducted at the Oshiwara crematorium, scores of people gathered outside. Curious fans hoping to catch a glimpse of their favourite TV stars jostled with mourners who were shocked at the death of the popular actor along with TV crews.

The actor's mortal remains left Cooper Hospital around 1:20 pm in a hearse decorated with marigold flowers and amid heavy police security and crowds of people hoping to catch a last glimpse of the actor.

Shukla's mother Rita and his colleagues, including actors Aly Goni, Paras Chhabra, Mahira Khan, Abhinav Shukla, Jay Bhanushali with his wife Mahhi Vij, were among those inside the crematorium.

Shukla's friend and rumoured girlfriend, Shehnaaz Gill arrived at the crematorium with her brother. Shehnaaz and Shukla met during 'Bigg Boss 13' and became an extremely popular couple.

Before stepping out of the car, Shehnaaz was seen breaking down as her brother comforted her. She was then escorted inside the crematorium by her brother and police officials amid a crowd of journalists and videographers.

Asim was also seen sitting at the stairs of the crematorium as the final rites were going on.

Actor Sambhavna Seth broke down in front of the camera while talking to a news channel after the funeral. She revealed that Sidharth's mother has been trying to remain strong. "I cannot believe that Sid is no more. Seeing his family breaks my heart. But the way her mother is holding back herself is unbelievable. However, Shehnaaz is in a very bad state. She is inconsolable," she stated.

Bollywood actors Varun Dhawan and Rajkummar Rao were among those who visited the actor's house on Thursday evening.