Glorious past and a shining future for 'Dhakai Jamdani' 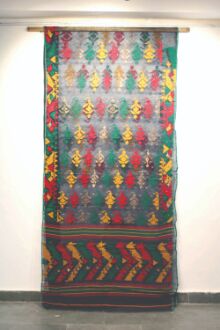 India International Centre (IIC) has organised a physical exhibition of Dhakai Jamdani sarees. On display are some exquisite museum-quality Dhakai Jamdani textiles from the collection of Siddhartha Tagore, Director of Art Konsult Gallery. The collection has late 19th century pieces woven in Dhaka (Bangladesh) and some from an earlier period including some rare pieces produced by the East India Company. The exhibition, curated by Puneet Kaushik and Rema Kumar will go on till October 4, 2021, at IIC's art gallery, Kamaladevi Complex from 11 am to 7 pm.

Jamdani was originally called Dhakai, after the city of Dhaka from East Bengal, now Bangladesh, where it was exclusively hand-woven for centuries. The secret behind its beauty could be attributed to Phuti Karpas, an exceptional silky cotton plant exclusive to the region, which grew near the fertile estuarine banks of the river Meghna.

at the confluence of three rivers - Meghna, Brahmaputra and Sitalakhya - was well known for producing some of the finest cottons in the world, including the muslin. Dhaka muslin had vast global patronage, stretching back thousands of years, long before it was adorned by aristocratic women in Europe. There is no clear date of the origin of this awe-inspiring textile, though there is mention of this term (muslin)

in a variety of sources, including Kautilya's Arthashashtra (3rd century BC) and the Gupta period (4th-6th century AD).

"The cloth is like the light vapours of dawn," were the words of Yuan Chwang, a Chinese Buddhist scholar/traveller visiting India (629-645 AD). It was popular with the ancient Greeks and Romans and muslin from India is mentioned in the book 'Periplus of the Erythraean Sea' ('Voyage Around the Erythraean Sea'), authored by an anonymous Egyptian merchant around 2,000 years ago.

Muslin was deemed worthy of clothing statues of goddesses in ancient Greece, countless emperors from distant lands and generations of local Mughal royalty. It reached its zenith during the Mughal rule (16th-18th centuries) and elevated this already flourishing trade into an art form. So enamoured with this masterfully finished fabric, they affectionately named it in Persian after the floral patterns found in the Dhakai textile, 'Jam' meaning flower and 'Dani' meaning vase or container, offering its weavers' extensive patronage.