Gear up for a laugh riot

Actors Saif Ali Khan and Rani Mukherji get candid about their upcoming film, in which they play a small-town character 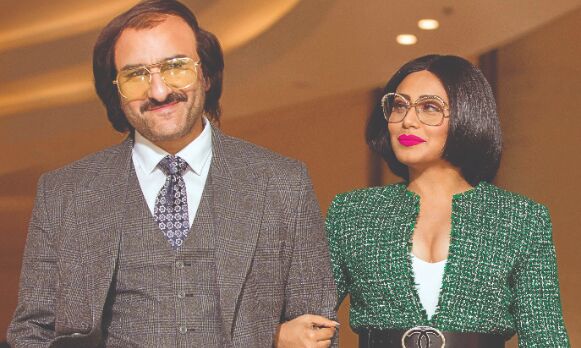 The most compelling factor that attracted Saif Ali Khan to join the cast of his latest film 'Bunty Aur Babli 2' was the rare opportunity to play the character of Rakesh Trivedi, also known as Bunty, who hails from a small town in Uttar Pradesh.

The trend has changed massively and films these days are all about coming 'home', said the actor who has often played suave-oozing characters living in metro cities in hit films like 'Dil Chahta Hai', 'Hum Tum', 'Kal Ho Na Ho' and others.

"I was excited about playing a small-town character because a lot of characters I played in the past were very urban, NRI and wealthy. The trend has changed massively to come home. It is more interesting to do a character from a small-town in Fursatganj rather than in New York now," Khan said in an interview.

The actor added, "I was happy I was getting a chance to do that because it was relevant. I had that stomach, a little accent and performance-wise, I thought it would be interesting."

Saif said it was heartening to see Indian cinema pick up on 'Made in India', which he referred to as a 'movement'.

The New Delhi-born actor also praised makers for looking at 'our own culture' as there are enough stories here.

"Without getting into politics, I think it is important to be aware of these things, discover them and be proud and remember our heritage and part of that is movies," he said.

In 'Bunty Aur Babli 2', Khan plays the other half of the original con artist titular duo, Bunty opposite Rani Mukerji, his co-star of films like 'Hum Tum', 'Ta Ra Rum Pum' and 'Thoda Pyaar Thoda Magic'.

He steps into the role originally played by Abhishek Bachchan in the first film which was released in 2005.

The actor said his Bunty is a man struggling with a mid-life crisis who is sort of 'heroic' and admirable.

"He is very loyal to his wife who quite often bullies him. You like him because you feel bad for him, you admire him because he still stands by her," he added.

What was also refreshing about the film was reuniting with Mukerji as they play people around their real ages and not 'that young couple we played in 'Hum Tum'," he said.

"We are playing a couple that is quite over the hill, retired into boredom and into the odd quiet whisky being the only happy thing really to look forward to. And then they get a chance to get the zing back in life and have a good time," he shared.

'Bunty Aur Babli 2' being a 'Yash Raj Films' production was also a homecoming of sorts for the actor, who made his acting debut in 1993 with 'Parampara', directed by the late Yash Chopra. His last project with the banner was 2008's fantasy comedy-drama 'Thoda Pyaar Thoda Magic' and animated rom-com 'Roadside Romeo'.

"Doing a film with Yash Raj was very high on my list of things to do. There were sentimental reasons that made me feel want to work with them. I started my career with Yash Raj. He was someone whom I'd like to call a guide. He was too senior to be a friend, but I thought of him as a friend. He was a mentor, I suppose," he said.

Rani Mukerji, who returns to the big screen with the upcoming comedy 'Bunty Aur Babli 2', two years after her actioner 'Mardaani 2', said no amount of experience can combat pre-release anxiety, which ironically also keeps artistes alive because they are fuelled by the anticipation of audience's response.

In a recent interview, Mukerji said she is still as nervous about her latest 'Yash Raj Films' project as she was when she started her career in the 1990s.

"The anxiety of a new film releasing never fades. Nothing ever fades. As actors, we always wait for the reactions of the audience, for whom we work. We are greedy for adulation. If you are not greedy for adulation, you cannot be a true actor because when we perform, you want to hear the claps and whistles," she shared.

She added, "If I am not waiting for my film's release, not waiting to hear what the audience thinks of me, then I should pack my bags and leave. For every actor, the nerves are always there. Whether it is their first film, 20th film or 100th, we always wait to know what is going to happen on that Friday."

Rani said the success of 'Bunty Aur Babli', which also featured megastar Amitabh Bachchan as a cop desperate to catch the con couple, led to the immediate possibility of a sequel but the team took time to crack the idea.

"The story came after 15 years. There was a long gap because they could not crack the sequel. Right after the first film, there were talks that Shaad and Aditya Chopra will come together for the sequel. But Shaad did not get a track, so he went to make 'Kill Dill' instead. Adi had this story idea, which he shared with Varun. Then he came up with his version which was cracking," shared Rani.

She added, "The premise of having these youngsters come in was interesting. Even for me as an actor, to take a character and see it after 10 years was refreshing. We rarely get a chance to take our characters further on and in a different set-up."