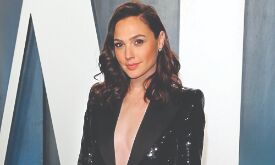 Hollywood star Gal Gadot is set to turn the evil queen in Disney's live-action adaptation of Snow White. Gal, who is popularly known for playing Wonder Woman in the DC universe, will unleash her wicked side in the film.

According to a 'Deadline' report, "The live-action film will expand upon the story and music from the original."

It further shared that the Oscar-winning duo of Benj Pasek and Justin Paul, who have delivered hits like 'La La Land', 'The Greatest Showman' and 'Dear Evan Hansen', will write new songs for the movie.

Regarding getting Gal Gadot on board, the same report read, "While casting for Snow White was long and thorough, studio executives always had their eye on Gadot for the role that started it all when it comes to classic 'Disney' villains. Gadot was also intrigued at the opportunity of joining stars like Angelina Jolie and Cate Blanchett, who previously played iconic villains from the 'Disney' vault. After scheduling was worked out, a deal closed this week."

Gal Gadot, who will soon be seen alongside Dwayne Johnson and Ryan Reynolds in 'Netflix' release 'Red Notice', is expected to start shooting for Snow White in 2022.