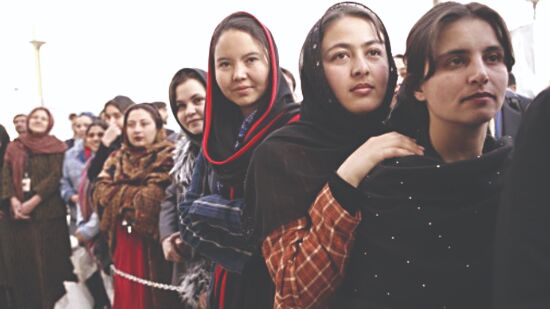 Mumbai: Expressing concerns over Taliban's control on Afghanistan, members of the Hindi film industry - Kabir Khan, Sonu Sood, Swara Bhasker and Shekhar Kapur - said their thoughts and prayers are with the people of Afghanistan.

Kapur said he feels sad for Afghanistan which was "wrecked and destroyed by colonial ambitions of foreign powers."

Khan, who had made several documentaries in post-Taliban Afghanistan and also set his feature directorial debut, 'Kabul Express', in the country, took to Instagram and posted latest pictures from the region.

Sood took to Twitter and wrote, "Afghanistan stay strong. Whole world is praying for you."

Bhasker shared an artwork by Afghan Graffiti artist Shamsia Hassani, which depicted a hijab-clad girl, looking frightened, clutching onto a casio as a group of armed men watch over her.

"The Afghan people have been thrown to the wolves. Women especially. #Taliban are monstrous in their brutal exercise of force and power. They are murderers and misogynists; their ideology is one of hate and violence and that won't change," Bhasker wrote.

Actor Sayani Gupta shared the same artwork on her Instagram and wrote she was terrified to see what Afghanistan was going through.

Filmmakers Anurag Kashyap, Hansal Mehta and lyricist-writer Varun Grover also shared Afghan independent filmmaker Sahraa Karimi's August 13 open letter requesting the film communities of the world to be the voice of the people of Afghanistan in this hour of crisis.

Karimi, who has directed films like 'Hava, Maryam, Ayesha' (2019) and 'Afghan Women Behind the Wheel', wrote, "Everything that I have worked so hard to build as a filmmaker in my country is at risk of falling. If the Taliban take over they will ban all art. I and other filmmakers could be next on their hit list. They will strip women's rights, we will be pushed into the shadows of our homes and our voices, our expression will be stifled into silence."

The 38-year-old filmmaker said Afghanistan is going through a humanitarian crisis, and yet "the world is silent".

"We need your voice. The media, governments, and the world humanitarian organizations are conveniently silent as if this 'Peace deal' with the Taliban was ever legitimate. I do not understand this world. I do not understand this silence. I will stay and fight for my country, but I cannot do it alone. I need allies like you. Please help us get this world to care about what is happening to us. Be our voices outside Afghanistan," her letter read.

Sharing a picture of the Taliban members inside the Presidential Palace in Kabul, Anubhav Sinha wrote, "Look at this picture. This must be the top brass of some sorts right now inside Afghanistan. One question. How old were these people 20 years back when America showed up in their backyard the second time?"