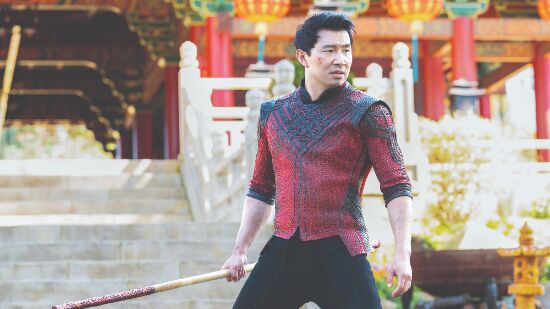 New Delhi: The resounding cheers and applause at a special screening of MCU's latest film 'Shang-Chi and the Legend of the Ten Rings' brought back the memories of watching a superhero movie on the big screen in the pre-pandemic days.

In a year where the threat of the COVID-19 pandemic continues to loom large, 'Marvel Cinematic Universe' aficionados on the evening of August 29 thronged the 'PVR ECX' theatre in Chanakyapuri here that hosted the showcase of the upcoming tent-pole from the studio.

Fans queued up in long lines at the entrance of the theatre, socially distanced and patiently waiting for a chance to get in and watch the first 'Marvel' movie to release in India since the beginning of the pandemic.

The fan frenzy inside the cinema hall was quite palpable and for many, it was a moment to relive the good old days of watching a film in a massive dark hall.

Starring Chinese-Canadian actor Simu Liu, 'Shang-Chi' is one of the most anticipated films of this year.

The movie, directed by Destin Daniel Cretton, marks Marvel's first project with an Asian lead. Cretton and Dave Callaham have penned the story.

Set after the events of 'Avengers: Endgame' (2019), the movie follows Shang-Chi (Liu) who is drawn into the clandestine 'Ten Rings' organisation, headed by his estranged father (Tony Leung) and is forced to confront the past he thought he left behind.

The new superhero was a hit among the audience members who started rooting for him right from the moment he threw his first punch in the movie.

Such was the excitement that even a casual reference to Robert Downey's 'Iron Man', one of the tallest heroes of the MCU, was met with loud cheers.

The film's breathtaking action pieces and intimate storyline also ensured that the fans were in for a quintessential 'Marvel' treat.

'Shang-Chi and the Legend of the Ten Rings' has been produced by Disney-owned 'Marvel Studios'.

In India, the film will be released on September 3 in English, Hindi, Telugu and Kannada.