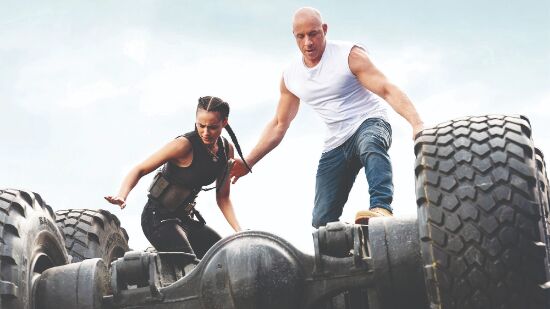 After many delays over a year and a half, 'F9' opened to a mighty 70 million from 4,179 North American venues. That is by far the biggest start for a movie in the US box office since the onset of COVID-19.

The big-screen homage to hulking men, speedy cars and gravity-defying stunts is giving some much-needed momentum to the movie theatre business, which has been struggling to rebound as audiences begin to feel comfortable returning to their local multiplex. 'F9' is the latest blockbuster-hopeful to set a new box office benchmark for Coronavirus times. Before this weekend, Paramount's 'A Quiet Place Part II' held the pandemic-era opening weekend with 48.3 million in inaugural ticket sales.

'F9' was not expected to reach the opening weekend heights of its franchise predecessors because attendance has not returned to pre-Coronavirus levels and the Canadian box office, which accounts for part of North American revenues, is still almost entirely shut down.

In terms of 'Fast' series launches, 'F9' has a slight edge on the 2019 spinoff 'Hobbs and Shaw', which generated 60 million and ended its theatrical run with 173 million in the US and 759 million globally.

David A Gross, who runs the movie consulting firm 'Franchise Entertainment Research', said the inaugural weekend of 'F9' is 'an excellent opening in an extraordinary series'.

"During the last month, movie-going has shown flashes of real strength, including this weekend and 'A Quiet Place 2', but it has also been tentative. 'F9' and 'A Quiet Place 2' are the cleanest reads of what the business can do now - both strong series and pure theatrical releases/no streaming."

Gross referred to Disney's 'Cruella', 'Raya and the Last Dragon' and the recent 'Warner Bros' titles like 'The Conjuring: The Devil Made Me Do It' and 'Godzilla v/s Kong'.