Exploring the limits of form, colour and texture 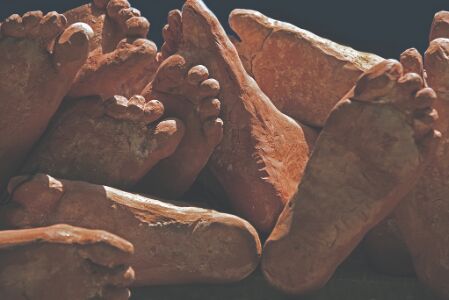 India International Centre (IIC) has organized an online exhibition of photographs by Mala Mukerjee from Kolkata. Titled 'Fleeting Footprints of Light', exhibition is on view till August 8, 2021.

In her work, the photographer presents a mix of colour and abstract compositions-a play with light, exploring the limits of form, colour and texture.

Throwing more light on the same, she says, "Those of you who are familiar with my work will know that my quest has always been to capture the fleeting footprints of light on objects, no matter how ordinary they may be. The works on display on this show are a continuation of that search."

"If I were to look back on my long innings as a photographer, I will admit I am most comfortable when I am in a position to let my imagination ramble free and take me to wherever they will. I enjoy playing with light and exploring the limits of form, colour and texture. The end-product sometimes surprises me, for light is a master painter. Objects get transformed by its magical touch. I try to capture those moments for you."

She added, "This exhibition has a mix of colour and abstract compositions. Every work has a special place in my memory, an association of joy and happiness, if you will.

It is this joy that I want to share with you."

A graduate in Applied Art & Design Studies in Photography from the London Guildhall University, Mala Mukerjee's work has been exhibited in all major cities of India as well as in Bangladesh, Belgium, China, Greece, Indonesia and in London, Oxford and Cambridge (UK).

In 1993, Mala was amongst the prize winners in 'Our Big City' Competition organised by 'The Evening Standard' and 'Carlton Television', London. In 1997 she was nominated for the Leopold Godowsky Jr. colour photography award.

She has received awards for excellence from the Owen Rowley Art Foundation in London, the Academy of Visual Medium in New Delhi, the 2nd China International Digital Photography exhibition in Beijing, and Honorary Fellowship of the Bangladesh Photographic Society. BLINK, an art publication by the Phaidon Press, London, featured her in 2002 among the top 100 Photographers of the world.

As the Chairperson of the International Photography Museum and Gallery Alliance (IPMGA), headquartered in China, she organized a major International photographic festival and workshop in Kolkata in 2014.

Mala's work has been featured in many books and periodicals in India, China, Germany, Australia, the UK and the USA. She has jointly authored three books on Kolkata's heritage titled 'Colonial Calcutta' (Bloomsbury, 2012), 'Where God's Reside: Sacred Places of Kolkata' (Niogi Books, 2018) and 'Adda : the College Street Coffee House'(Notion Press, 2020).