'Everything is for you, always, every day' 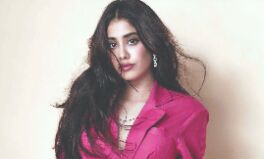 Sridevi, who was hailed as Indian cinema's first woman superstar, passed away at the age of 54 on February 24, 2018.

Extending birthday wishes to her late mother, Kapoor in an 'Instagram' post said, "Happy birthday Mumma. I miss you. Everything is for you, always, every day. I love you."

She wrote the caption along with a throwback photo with Sridevi.

The veteran actor was married to producer Boney Kapoor and shared daughters Janhvi Kapoor and Khushi Kapoor with him.

Janhvi Kapoor, who made her debut with /Dhadak' in 2018 soon after her mother's death, will next be seen in Aanand L Rai-produced 'Good Luck Jerry' and 'Dostana 2', which is backed by producer Karan Johar.