'Every relationship has its struggles' 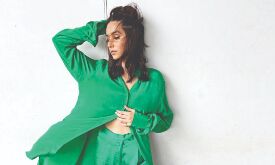 Actor Shibani Dandekar, who had revealed her relationship with 'Toofan' star Farhan Akhtar after months of speculations and secret romance by putting up posts on her 'Instagram' handle, said she does not believe in hiding anything but only share her moments with the people who she knows.

Throughout the pandemic lockdown in 2020, Shibani and Farhan chose to stay together.

She further stated that every relationship, be it a secret or officially public, 'has its struggles' and that the lockdown did increase it, but they managed to figure a way of functioning.

Recently, the 'Hostage' star had also opened up about her wedding plans and mentioned that she will tell everyone about her marriage once she figures it out.

This year, Farhan Akhtar and Shibani Dandekar completed three years of being together.