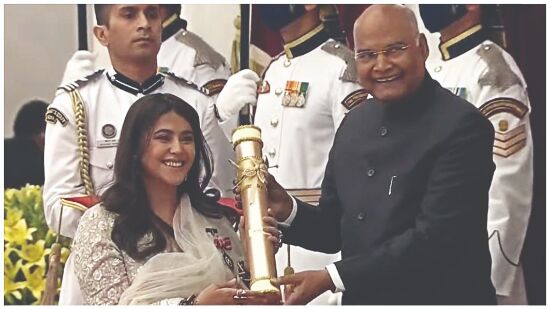 President Ram Nath Kovind presented Padma awards to 73 individuals, some posthumously. Of these, four were Padma Vibhushan, eight Padma Bhushan and 61 Padma Shri awards for the year 2020, according to a statement issued by the President's office.

Ranaut, who was presented with the Padma Shri two weeks after she picked up her fourth best actress National Film Award, expressed her gratitude for receiving the honour "for being a model citizen" of India.

"As an artist, I have received many awards, love and acknowledgement but today I have received an award for being a model citizen from this country, this government. I'm grateful," she said in a video posted on her official Instagram page.

"When I started working at a young age, I didn't achieve success until 8-10 years into my career. I turned down offers to endorse fairness products, rejected working with big production houses," Ranaut added.

The actor-producer further said receiving "this honour will shut the mouths of many people" who often ask her why she concerns herself with matters of national importance. Joshi, who was presented the Padma Shri in the field of art, is an award-winning stage, television and film actor known for her work in several serials. She has performed in about 15,000 shows in Gujarati, Marathi, Hindi and Marwari over a span of six decades.

Sami was also awarded the honour in the field of art. The Pakistan-origin musician, who is also a concert pianist, singer and actor, became an Indian citizen in 2016.

The music composer did not post anything on Monday, simply retweeting congratulatory messages.

Sami was at the centre of a political debate over his Padma Shri award announcement last year for his father's career in the Pakistan Air Force but he had dismissed the controversy in an interview.

"My father was a decorated fighter pilot and he was a professional soldier. He did his duty for his country. I respect him for that. It was his life. He got an award for that. I did not benefit or credit from that. Similarly, he cannot get credit for what I do. What does my award have to do with my father? It is irrelevant," he had said in January 2020.